PPC Ltd, the leading supplier of cement in southern Africa, is a truly African success story – a focused business that reflects the strengths of its people, products and services. From humble beginnings, the cement giant has eight cement manufacturing facilities and three milling depots in South Africa, Botswana and Zimbabwe, with the capacity to produce around 8 million tpa of cement products. PPC also produces aggregates, metallurgical-grade lime, burnt dolomite and limestone. In addition to serving its domestic markets, cement and lime are also exported to other African countries. As PPC expands into the rest of Africa, its strategic objective is to grow the revenue from outside South Africa to 40% by the 2016 financial year.

Last year, Pretoria Portland Cement Company Limited changed its name to PPC Ltd. The change in name is aligned to PPC streamlining its corporate structure by creating separate South African operations and international operating entities. All South African operations will be divisionalised under the new SA Operating Company. This also supports the company’s strategy to expand its footprint on the African continent.

PPC’s aim is to grow into a leading emerging-market business, starting in Sub-Saharan Africa. The company believes that it is crucial that PPC does not lose focus on performance and image in its historical markets. As such, two key strategies support PPC’s vision: enhance the cement industry-leadership position in southern Africa, and expand the operational footprint into other parts of Sub-Saharan Africa.

In 2012, PPC started making inroads into the rest of Africa via acquisitions, which included a 27% stake in Ethiopia’s Habesha Cement Share Company for R100 million and a 51% stake in Rwanda’s Cimerwa for R630 million.

PPC’s strategy to increase its turnover outside the borders of South Africa was given a boost as it planned to establish new 1 million tpa cement plants in the Democratic Republic of Congo (DRC) and Zimbabwe at a cost of US$200 million (R1.8 billion) each.

“Studies on the limestone reserves and markets have been completed and if everything goes well construction on both projects would commence this year. The plants will take about 24 months to complete,” says CEO Ketso Gordhan.

The Habesha Cement Share Company acquisition in Ethiopia is already a significant step in PPC’s African expansion strategy, as it is believed that the plant has the capability to increase PPC’s non-South African revenue by as much as 5% from 2016.

Cement production at the HCSCo plant is planned to commence during late 2015. The plant’s future development plan includes an option to double the capacity to 2.8 million tpa.

Ethiopia is the second-most populous country in Sub-Saharan Africa with a population of around 85 million. The country’s cement demand is estimated to be in the vicinity of around 9 million tpa. The country also offers PPC a stable economic environment in which to thrive. The ruling party, the Ethiopian People Revolutionary Democratic Front, has been in power since 1991 and has earmarked infrastructure development as an extremely high priority for economic growth.

In Rwanda, PPC acquired a 51% stake in Rwanda’s sole cement maker Cimerwa for US$69.4 million. Cimerwa has been the only cement producer in the country for the past 28 years. Currently, the plant has a manufacturing capacity of 100 000 tpa; PPC will be looking to increase its capacity to around 600 000 tpa.

Current demand for cement in Rwanda is estimated at 350 000 tpa. Based on Rwandan and the surrounding region’s positive economic outlook‚ regional cement demand is projected to increase to 1 million tpa during the next 10 years.

Written by PPC Ltd, South Africa. This is an abridged version of the full article, which appeared in the August 2013 issue of World Cement. Subscribers can view the full article by logging in.

Read the article online at: https://www.worldcement.com/africa-middle-east/31072013/ppc_cement_expansion_plans_sub_saharan_africa_75/

Nigeria’s Dangote Cement releases its results for 1H13, which saw profit before tax rise by 52.8%. 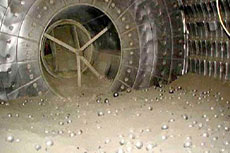