NESHAP or National Emission Standards for Hazardous Air Pollutants are the stationary source standards for hazardous air pollutants in the US. NESHAP originally regulated seven hazardous air pollutants but in 1990 the Clean Air Act Amendments expanded that list to 187 hazardous air pollutants. The 1990 expansion was also accompanied by requirements for Maximum Achievable Control Technology (MACT), so NESHAPs are often referred to as MACT standards. Another US standard is the New Source Performance Standards (NSPS). These standards apply to new, modified or reconstructed facilities, including cement plants. The responsibility for developing both NESHAPs and NSPS falls to the US Environmental Protection Agency (EPA). The latest standards require the US cement industry to achieve compliance by 9 September 2015. A critical component of that compliance will be the requirement for continuous emissions monitors (CEMS) for many of the regulated pollutants.

CEMS are the state-of-the-art technology that allows cement plants a means to demonstrate environmental compliance. EPA defines CEMS as “the total equipment necessary for the determination of a gas or particulate matter concentration or emission rate using pollutant analyser measurements and a conversion equation, graph or computer programme to produce results in units of the applicable emission limitation or standard”. The mechanics of their operation are beyond the scope of this article; however, there are some basics that all systems share. They all have a means to obtain a sample, condition the sample, deliver the sample to an analyser, analyse the sample and record and report the results of the analysis. The heart of the system is the analyser; the component that uses some combination of physical or chemical analysis to measure an emissions concentration.

Plant personnel will tend to focus on the results of the analysis in order to determine whether they have exceeded their limit or achieved compliance. This is why it is so important that the sample be obtained, conditioned and tested in strict adherence to the CEMS manufacturer’s requirements. The ultimate goal is to ensure that the test result or reading observed by the operator is truly representative of the emissions generated. Operators will have different concerns for each one of their emissions.

The first concern is with the equipment itself. Nothing is perfect and all equipment measurements will have random and systematic errors. Probably the most common example of a random error is operator error – forgetting to calibrate the unit, using the wrong scale, or using the wrong unit. Systematic errors are errors in the equipment itself; the device just isn’t working properly. When systematic errors become additive the measurements will have a bias; for example, a gas gage that consistently reads low regardless of how much fuel is in the tank.

The choice of reference method is fundamental. Someone has to define just how much a kilogram weighs and just how long a metre is. Likewise, someone has to define what a particular emission concentration is or how many pounds of particulates there are. NESHAP references particulate matter in pounds per short tonne of clinker and mercury in pounds per million short tonnes of clinker so those weight measurements become critical. These measurements are coming from separate measuring devices and that means the maintenance of those measuring devices is just as critical. That also means accurately integrating the appropriate measurement into the respective emission equations. Any math errors in this chain of events defeat the entire system.

NESHAP references THC and HCl in parts per million by volume (in double and single digits, respectively) on a dry basis, and those measurements are no less critical. A million tonnes of clinker here, a few pounds of particulate there, a few parts per million of emissions somewhere else and pretty soon accuracy and precision become much more than some arcane academic discussion.

The RATA provides operators and regulators with important information. It notes the average difference between the pairs of measurements. Lower values indicate that the test results are close to the reference method results. RATA also supplies the standard deviation of the differences of the data pairs, along with the confidence coefficient. The confidence coefficient is a statistic based upon the number of data pairs and the standard deviation of the differences and is used in the calculation of relative accuracy. The number of test runs required by RATA and the actual calculation procedures are found within the performance specification.

This is an abridged version of the full article, which appeared in World Cement’s IEEE-IAS/PCA Conference Supplement 2014. Subscribers can view the full article by logging in.

Read the article online at: https://www.worldcement.com/the-americas/18042014/beyond_analysis_part_1/

The US Environmental Protection Agency has awarded the company with a Sustained Excellence Award for the 10th year running.

According to the USGS's latest Mineral Industry Survey, clinker production and shipments of Portland and blended cement increased in January 2014. 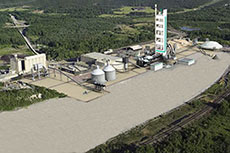 Craig Campbell and Joëlle Lipski-Rockwood, Lafarge North America Inc., USA, report on the ambitious modernisation project planned for the Lafarge Ravena plant, in this abridged article from the April 2014 issue of World Cement.