According to AFCP, the Argentine Portland cement association, its associate members dispatched 1.045 million t of cement on the domestic market in April 2015. This is 16.7% higher than the corresponding month in 2014 and 8% higher than the figure recorded in March 2015.

Portland cement dispatches including exports grew to 1.054 million t during the month, up 16.4% y/y. When compared to the previous month of March, this represents an improvement of 7.5%.

Read the article online at: https://www.worldcement.com/the-americas/07052015/cement-dispatches-on-the-up-in-argentina-in-april-801/

Monthly data from January 2014 through February 2015 show an increase in cement shipments and the production of clinker in the USA.

Net sales fell 16% y/y, in part due to lower sales in Colombia but also as a result of foreign exchange fluctuations.

In March 2015, cement production increased by 2% in Peru, with export growth leading to a slight rise in total dispatch figures. 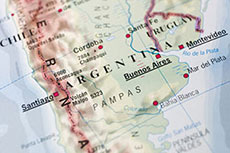