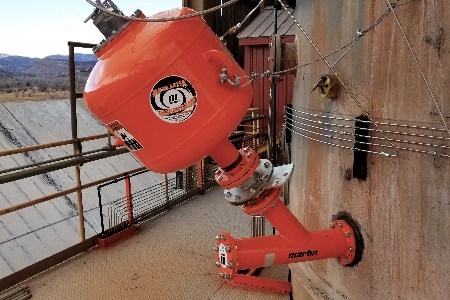 The system, which reduces expensive downtime associated with traditional installation methods, allows trained technicians to mount the units on clinker coolers, furnaces, preheaters, and in other high-temperature locations while production continues uninterrupted.

The patent-pending Martin® Core GateTM has been paired successfully with the firm’s Smart NozzleTM Series, a family of air cannon nozzle designs which can be serviced or replaced during production, without removing the cannons themselves. Requiring no confined space entry, the Martin® Core GateTM and the Smart NozzleTM are currently the only technology to safely install air cannons and replace nozzles during production.

“Both of these innovations represent significant technical breakthroughs in the industry,” stated Brad Pronschinske, Global Flow Aids' Manager. “In the past, when material accumulation problems became an issue, processors would have to either limp along until the next scheduled shutdown or endure expensive downtime to install an air cannon network. That could cost a company hundreds of thousands of dollars per day in lost production.”

Replacing a conventional fan nozzle on existing equipment typically requires the removal of refractory material from around the nozzle opening, however the Martin replacement system leaves the refractory undisturbed during service, and one worker can safely perform installations or maintenance from outside the vessel.

Read the article online at: https://www.worldcement.com/product-news/20042018/martin-engineering-offer-new-air-cannon-installation-and-service-that-prevents-shutdown/