Industrial automation has long been a matter of course for the production of paper sacks and automatic palletising of the finished sacks is an important part of it. Since 1988 the ARCOMAT from Windmöller & Hölscher has emerged as the world's top-selling paper sack palletising robot. The 300th machine has recently been sold to a customer in West Africa. 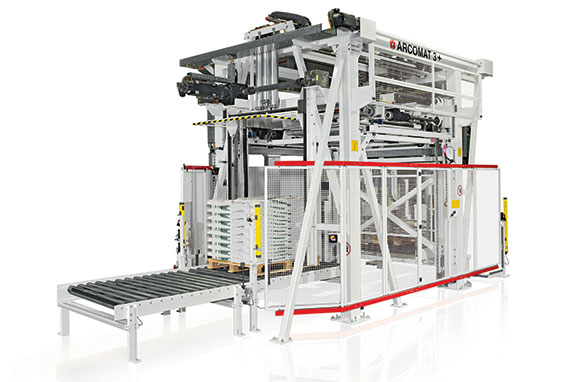 The significantly increased productivity of modern paper sack making, folding and gluing machines (‘bottomers’) can only be utilised efficiently by faster and faster palletisers. Meanwhile, quality requirements call for flat packets – only 10 to 12 sacks per packet is current practice. Both factors have driven the packet frequency from initially 10 – 12 packets to 33 packets/min.  ARCOMAT has changed the paper sack production process and has played an important role in doing away with strenuous, tedious and repetitive works in paper sack manufacturing plants. Thus, right from the beginning ARCOMAT enjoyed a very good acceptance in the market, not only in combination with new lines, but often also as a retrofit for existing paper sack making machines.

ARCOMAT is a palletising robot in portal design featuring three traversing axes and a sophisticated periphery for the infeed and alignment of sack packets and empty pallets as well as for the removal of finished stacks. A special technical feature of the ARCOMAT is the pre-forming of the layer on a table before placing it onto the stack, which leads to a significant improvement of the stack quality. Furthermore, the table serves as a magazine that can store some packets during pallet change, thus contributing to a continuous operation. Moreover, its function as a pressing plate for the finished stack is essential for a high stack quality.

Whereas the first ARCOMAT received its traversing programmes through a handheld programming unit, highly comfortable graphic programmes are available now which can be prepared in a separate ‘next-job’ programme level while the machine is operative with the current job. Alternatively, it is possible to import palletising programmes online, which have previously been prepared at a work preparation station.

Although the basic concept of the ARCOMAT system has remained unchanged, it has experienced countless improvements in the course of its marketing cycle. Instead of a PLC in connection with a robot-type path control, it now features a network-compatible IPC with touchscreen operator panel and internet-based tele-service. Its drive technology has continuously been adapted to the increasing palletising frequency. Today, highly dynamic servo drives position and align the sack packets. A newly developed type of gripper that enables the ready packet to move over saves waiting time and has led to a performance leap of several packets per minute. A motor-driven pallet lifting assembly has replaced the former scissor-type lifting table and has reduced waiting times significantly.

Even with packets of only 10 – 12 bags, the current ARCOMAT 3+ with its 33 packets/min. is able to keep up with the fastest W&H bottomers types AD 8300 and AD 8330 producing up to 360 sacks/min. ARCOMAT 3+ combines constantly high palletising quality with optimised process efficiency. The 300th machine will soon leave the assembly hall in Lengerich on its way to the customer in West Africa where it shall be used for the production of cement sacks.

Read the article online at: https://www.worldcement.com/product-news/04032015/windmoller-holscher-sells-300th-arcomat-450/

Siemens is focusing on digitalisation at this year’s Hannover Messe.

Prometheus Group and SMEC have formed a global partnership, which will initially focus on the cement and aggregates industry. 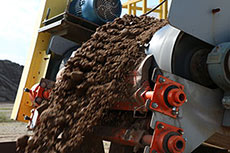 A new conveyor belt cleaner has been engineered to contain a smaller total volume of urethane, while maximising the usable area, produced in a streamlined process that allows the manufacturer to reduce the purchase price and overall cost of ownership.

Windmöller & Hölscher has announced that it has upped its stake in BSW Machinery (Bag Solutions Worldwide).