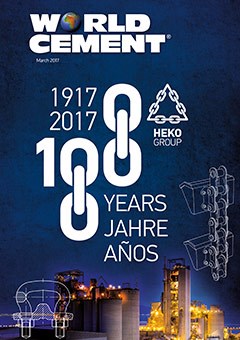 Many column inches (or should that be miles?) have already been expended discussing the start of Donald Trump’s presidency in the US – often with a great deal of passion. There is little need to rehash the various debates and controversies here. But one does stand out as of particular interest to our industry: the southern border wall.

The wall – a key feature of Trump’s election campaign – became official policy of the US government on 25 January, when the president signed an executive order authorising construction to begin. This has provoked an interesting debate as to how exactly the wall may impact demand for construction materials, with a wide variety of opinions offered.

That range of opinions is perhaps not surprising given the uncertainties around what exactly President Trump means by a wall. It’s a semantic question that will have very real world implications – not least for those companies that are set to gain from any uptick in demand caused by the wall’s construction. So what exactly is Trump’s border wall?

It’s widely accepted that the wall will not need to run the entire length of the border between the US and Mexico. A good chunk of that is already impassible due to natural barriers, such as rivers and mountains (although how much seems to be up for debate). Then there are pre-existing manmade barriers, including fences and vehicle barriers. And here we start to play semantics, as the PCA – which counts 743 miles of manmade barriers – admitted in a recent research note when it added the following caveat: “Some of these barriers may or may not constitute wall criteria according to the Trump Administration.” There are further uncertainties to grapple with, including the exact dimensions and the nature of the wall’s construction.

What does this do for cement demand? Here the uncertainty plays out to its fullest, with estimates ranging from 0.25 million t (PCA) on the low side to 7.4 million t on the high side (Exane BNP Paribas). It’s a range so wide as to be almost useless in assessing the wall’s impact – and a clear lesson in the difficulties of translating campaign promises into workable policies.

Where we can be more certain is that (with or without the wall) the outlook for US cement demand is generally positive. Often overlooked by more headline-grabbing stories is that the 2015 FAST Act will provide US$305 billion between 2016 and 2020 for transportation infrastructure upgrades. As Tom Hill, CEO of Summit Materials, said in a recent earnings statement, that will see an “acceleration in state-level infrastructure spending beginning in mid-to-late 2017.” This will happen without any further federal government support. But further support does seem likely, given the apparent bipartisan support for infrastructure investment.

Headlines are there to catch the eye and draw the reader in: they don’t necessarily reflect what’s really going on or what is of real importance. The Mexican wall is a great headline – but in terms of the US cement sector, it’s not the real story. That is to be found in the rather less glamorous investment in roads, bridges, waterways and airports that is already happening and that is likely to grow – if and when Congress and the Administration can turn campaign rhetoric into workable policy.