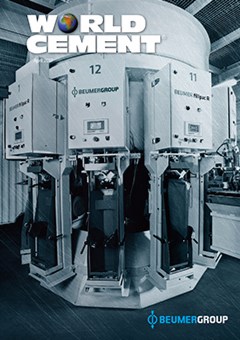 Last month, the Nigerian government confirmed that the country had reached self-sufficiency in cement production – a remarkable feat, given that it was not long ago that Nigeria was one of the world’s largest importers of cement. In 2011, for example, the country bought 5.1 million t of the building material.

The change in circumstances is largely down to one company: Dangote Cement. Indeed, not only has Dangote succeeded in ending Nigeria’s dependence on cement imports, according to its latest financial results, it actually exported cement from its Nigerian plants – some 0.4 million t, mainly via road to Ghana. That was enough to turn the country into a net exporter of cement, said Onne Van der Weijde, Group Managing Director of Dangote Cement.

Dangote’s rapid expansion of its capacity – not just in Nigeria but also around Africa – has changed the face of the African cement market. The company boasted cement capacity of 45.8 million in 10 countries in 2016; in 2011, it had only around 19.25 million of capacity.

Despite generating many of the headlines, Dangote is not the only African cement producer to be building out its capacity. South Africa’s PPC has also undertaken a number of expansion projects recently, as the company’s Hardie de Beer writes in this month’s regional report (pp. 18 – 21). PPC also made its own splash recently, entering into merger talks with rival South African cement producer, AfriSam.

“We think that consolidation in the industry will start to happen and we’ve got to make a choice as to whether we want to be the architects and lead that, [or] let it happen around us and not be sure of the outcome,” PPC’s CEO Darryl Castle told Reuters, following the news.

Africa used to be something of a cash cow for cement makers, where producers enjoyed fat margins and limited competition. In the past five years, this has changed: unprecedented capacity growth has disrupted the supply side, just as a period of economic uncertainty (on the back of the commodity market crash) weakened cement demand growth. As a result, cement prices are now comparable to the rest of the world, according to IA Cement’s latest cement market report, with producer margins dropping sharply.

For all of this shorter-term pain, however, there remains vast potential in Africa. Urbanisation in particular “represents an immense opportunity,” the African Development Bank said in its African Economic Outlook 2016, adding that “two-thirds of the investments in urban infrastructure until 2050 have yet to be made.”

It’s a point made by PPC’s de Beer: “With Africa’s cities having a combined population of 200 million people, a US$1 trillion GDP, half a trillion US dollars’ consumer spend, 17 million households and 80% of the continent’s households, it is not difficult to see why PPC still considers it a place of vast opportunity.”

With this long-term perspective in mind, the capacity expansions seen in the African cement sector in the past couple of years make a lot of sense. And while Dangote appears to have slightly slowed its expansion plans for the moment, it would be no surprise to see new plants cropping up from that company, and others, in the not too distant future.