The Materials Processing Institute is leading a major £6.5 million project to develop the world’s first zero emission cement on an industrial scale.

The Cement 2 Zero project will focus on the technical and commercial aspects of this breakthrough development, which will bolster green steelmaking, whilst eliminating the carbon emissions associated with the manufacture of clinker in cement kilns. 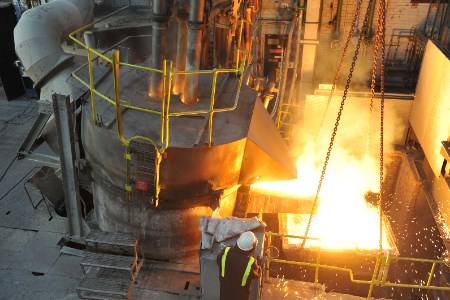 The concrete and cement sector is a key part of a combined mineral products industry, which contributed around £16bn to the UK’s GDP in 2018, and directly employs 81,000 people, supporting a further 3.5 million jobs; while steel recycling in the UK could expand to £11 million tpy by recycling all scrap – estimated to be worth £2.8 billion per year – with forecasts that the global market for steel recycling may treble over the next 30 years. The Cement 2 Zero project could create new markets within the circular economy, including the valorisation of construction and demolition waste.

The government-funded project was awarded through UK Research and Innovation (UKRI) as part of its Transforming Foundation Industries challenge.

Bringing the steel and cement industries together to develop a disruptive new process could support material and energy security and reduce the carbon emissions associated with conventional clinker production.

Cement clinker is produced by firing limestone and other minerals in a kiln and requires a substantial amount of energy and heat leading to approximately 6.5Mt of CO2 emissions per year. Consequently, the Cement 2 Zero project aims to produce clinker in an EAF powered by electricity. Therefore, as steelmakers transition to the use of renewable energy in their EAFs, the emissions relating to cement manufacture have the potential to be significantly reduced.

Dr Cyrille Dunant of the University of Cambridge noticed that the chemistry of recovered cement paste made it suitable for use as flux in the EAF process. As the high temperature reached by EAFs are suitable for the reclinkering of the paste, he had the idea that cement could be recycled under these conditions avoiding emissions both from the decarbonation of limestone for cement making and the production of the lime flux normally used in the EAF.

Initial tests conducted by the Materials Processing Institute found recovered cement can function as an effective EAF flux. As such the University of Cambridge researchers have invented a process that converts construction and demolition waste into recycled cement using an EAF which is used to recycle scrap steel. This project was conducted as part of an Engineering and Physical Sciences Research Council (EPSRC) funded project, awarded to research zero emissions cement from old concrete paste.

The Teesside-based Institute will use its expertise in operating its own EAF as part of the project. The project will also develop the UK’s first prototype crusher for recovering cement paste from construction demolition waste, and the creation of a prototype EAF slag cooling system to transform steel slag into cement clinker.

Chris McDonald, Chief Executive of the Materials Processing Institute, said: “We are delighted to be leading a project that has the potential to make a major contribution to achieving a zero-carbon society, secure and increase jobs in the UK cement and steel sectors and challenge conventional production processes, creating high-value materials from demolition waste.”

Dr Philippa Horton, Cambridge Electric Cement / University of Cambridge, added: “If Cambridge Electric Cement lives up to the promise it has shown in early laboratory trials, it could be a turning point in the journey to a zero-emissions society. We are delighted to collaborate with companies across the sector to expand the project from the laboratory, and into the wider supply chain.”

Business Secretary Kwasi Kwarteng said: “Driving down emissions from the production of cement is one of the key challenges facing British manufacturers and construction companies. Achieving it will have hugely beneficial knock-on effects for the competitiveness of businesses right across UK supply chains.

“Backed by UK Government funds, this world first project shows how the UK’s universities, businesses and government are working in tandem to deliver the technologies that can make a real, transformational difference to the decarbonisation of key industrial sectors.”

Read the article online at: https://www.worldcement.com/europe-cis/28072022/materials-processing-institute-leads-65m-project-to-transform-the-cement-and-steel-industries/