Sika has reported record growth of 13% in FY14 sales, at CHF5571.3 million. Net profit was up 28% at CHF441.2 million, attributed both to the increase in sales and disciplined cost management.

All regions contributed to the impressive performance, with sales in the EMEA region up 13.3%, up 7.9% in North America, 12.9% in Asia/Pacific and 16% in Latin America.

Strategy 2018 is delivering results in excess of Sika's targets and expectations. Its core features are the accelerated development of growth markets, investments in new factories and the launch of new products. A key growth driver in the year under review was the high-margin mortar business, which recorded sales growth of 31%. New factories were opened in Brazil, Mexico, Indonesia, Singapore, India and Serbia. In the US, two new production facilities were commissioned in Atlanta and Denver.

The 873 employees working in R&D are the main drivers of new product developments and Sika’s innovative strength. In the 2014 financial year, 70 new patent applications were filed, and a large number of new products were launched in all key target markets.

On December 8, 2014, Sika stated its position on the hostile takeover bid by Saint-Gobain, and shortly afterwards presented concrete proposals for ensuring that the Sika success story continues. The Board of Directors and Group Management reject the change of control in the proposed form. They will continue to act in the interests of Sika and its stakeholders, and, in the light of this background, are open to constructive talks with all the parties involved. The goal is to continue to move Sika's successful growth strategy forward unimpeded and thus secure the company's future.

Read the article online at: https://www.worldcement.com/europe-cis/27022015/sika-reports-record-figures-for-fy14-419/

Sika AG has released a statement regarding the voting rights held by the Burkard family and Schenker-Winkler Holding AG, as the company continues to navigate a possible takeover bid from Saint-Gobain.

Sika claims Saint-Gobain is not taking its concerns seriously.

Sika has agreed to talk to investors about the possible acquisition of a controlling stake in the company by France’s Saint-Gobain. 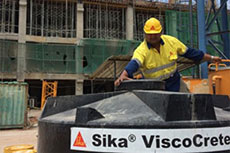 Sika has increased its presence in Asia-Pacific with the establishment of a subsidiary in Sri Lanka.