HeidelbergCement has been honoured as the best improver in disclosing environmental information among the 350 largest listed companies in the Germany-Austria-Switzerland (DACH) region by the Carbon Disclosure Project (CDP). HeidelbergCement now ranks among the top five companies in the energy and materials sector. The company received the award as best improver during the CDP Leadership Award Conference & Ceremony held at the BMW Welt in Munich on 16 October 2014. The award was accepted by Rob van der Meer, Public Affairs Director at HeidelbergCement.

“We are very pleased that we could improve our disclosure score to 97 out of 100 this year and now rank among the five best companies in the energy and materials sector,” said Rob van der Meer. “Foundation for this success is the close cooperation of various departments, including environmental management, purchasing, logistics, human resources, as well as R&D and production. Only in that way we could further improve our systematic data generation and reporting and were able to report on risks and opportunities connected to climate change and our achievements in a much more detailed way. Hence, this award has been earned by all employees who were part of the Carbon Disclosure Project and contributed to this success.”

CDP works with thousands of companies to tackle climate change, collecting environmental data as well as information on targets, initiatives, risks and opportunities from companies worldwide, and prepares a report every year. The work of CDP is supported by a large number of institutional investors who want to minimise the risks related to climate change in their portfolio.

Read the article online at: https://www.worldcement.com/europe-cis/17102014/heidelbergcement-honoured-by-cdp-as-best-improver-in-disclosing-environmental-information-689/ 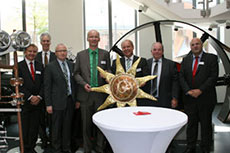 Castolin Eutectic has given the Conservationist of the Year Award 2014 to HeidelbergCement in recognition of ‘its sensitive approach to resources, the underlying innovation and its solution-oriented strategy’.

In an interview with a local newspaper, Sales and Marketing Director at HeidelbergCement Caucasus, Akaki Chkhaidze, tells how the company has invested in environmental upgrades and biodiversity projects.