The UK’s Office for National Statistics (ONS) estimates that construction activity in August 2014 declined by 3.9% when compared to July 2014. However, the revision of July’s output (from 0% m/m to 1.9% m/m) has impacted the August m/m comparison.

Construction industry output in August 2014 is estimated to be 0.3% lower than in the corresponding month in 2013. According to the ONS, this is the first time since May 2013 that activity has fallen y/y.

Commenting on the latest ONS statistics, Barbour ABI’s lead Economist Michael Dall stressed that the 3.9% m/m decline in August was largely due to upward revisions in July’s data.

“While all sectors, other than public housing, fell in August, the longer-term trends in the residential sector are still very encouraging. The other major sectors in construction however are not performing as well, with Infrastructure and Commercial continuing to record declines in growth,” explained Dall.

“It is vital for the industry that all of these sectors grow to ensure pre-recession levels of activity are achieved sooner. Recent positive figures on new orders for commercial projects, and increasing levels of business investment in the economy, should hopefully have a positive impact in the coming months,” added Dall. “For these reasons, while today’s declines are disappointing, the improving sentiment in the commercial sector in particular should start to boost output levels in the coming month.”

Read the article online at: https://www.worldcement.com/europe-cis/13102014/ons-releases-construction-output-estimates-for-august-2014-uk-650/

New Ecobuild whitepaper brings together ‘think pieces’ from industry experts on the future of sustainable building.

The ‘Supply Chain Capacity and Skills’ group will offer guidance and work with the UK government to help improve capability and capacity, as well as offsetting inflationary pressures in the infrastructure sector.

The UK Commission for Employment and Skills (UKCES) is working with leading construction companies to tackle the issue of skills deficiencies in offsite construction. 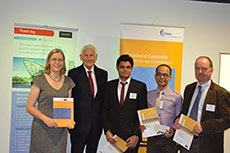 Students at the University of Manchester picked up the top prize in this year’s Structural Concrete Competition, which concluded with a prize giving ceremony in London.