Activity in Portugal’s construction sector continued to decline in 2013, falling by 15%. Within this, the residential sector contracted by 18%, non-residential by 13.8% and public works by 14%. According to FEPICOP, there was an increase in confidence levels in 2H13, in terms of both activity and employment levels. However, this was not enough to offset the problems experienced in 1H13.

Read the article online at: https://www.worldcement.com/europe-cis/09042014/cement_construction_statistics_morocco_portugal_canary_islands_18/

The latest estimates from Eurostat indicate that production in construction increased in both the euro area and EU28 in the first month of 2014. 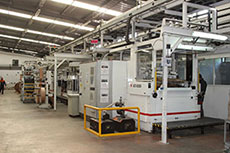 The company’s industrial bags plant in Casablanca has been certified according to ISO 9001:2008 for quality management systems.