The latest Markit/CIPS UK Construction Purchasing Managers’ Index® (PMI®) recorded a seasonally adjusted rate of 64.0 in August 2014, an increase on July’s 62.4 and well clear of the neutral 50.0 threshold. This marks the second largest surge in output since the pre-recession peak in August 2007, and the fastest rise in output since January 2014. Growth was recorded in the residential and commercial construction sectors, while civil engineering activity improved at the strongest pace since March 2014.

The rate of employment among construction firms also remained strong, with growth just slightly below the record-high experienced in July 2014. Demand for sub-contractors grew and, in turn, this led to the biggest drop in sub-contractor availability and the steepest increase in sub-contractor rates since the survey began in April 1997.

The improving economic backdrop and greater ‘willingness to commit to new construction projects’ were the main reasons given for a continued rise in new work in August. According to the Markit/CIPS UK Construction PMI®, ‘construction firms remain highly upbeat about the prospects for output growth over the year ahead, with more than half (59%) expecting a rise in business activity and only 7% forecasting a decline’.

“UK construction firms saw one of the sharpest rises in output for seven years in August, with increasing workloads driven by an array of factors including surging homebuilding activity, greater infrastructure spending and renewed confidence within the commercial development sector,” said Tim Moore, Senior Economist at Markit and author of the Markit/CIPS Construction PMI®. “A broad-based upturn in construction demand has created a boom in job creation this summer, as construction companies look to replace capacity lost in the aftermath of the recession. However, acute skill shortages meant that sub-contractor charges rose at the fastest pace since the survey began in 1997. Meanwhile, sub-contractor availability fell at a survey-record pace, which could act to further ignite pay pressures in the short-term.”

Read the article online at: https://www.worldcement.com/europe-cis/03092014/strong-performance-for-uk-construction-output-august-2014-411/ 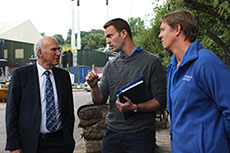 The Award for Enterprise for International Trade recognises Caterpillar’s contribution to UK exports.

The international awards are designed to recognise and celebrate successful health, safety and environmental practice.