JK Lakshmi Cement is reported to be targeting growth to 20 million t capacity over the next five years. It is currently on track for 11 million t by the end of March 2016, with facilities in Chhatisgarh, Rajasthan, Gujarat and Haryana. Talking to India’s Economic Times, company director Shailendra Chouksey said that the company will expand its existing units before looking into acquisitions and greenfield projects. He added that the ability to expand capacity is to a great extent dependent on the outcome of the election and the new government’s response to applications to extend mining licenses. No plans for expansion projects have been announced at this time.

Kesoram Industries, part of the Birla Group, reported a Rs.199 crore loss in the January – March quarter, as net sales fell to Rs.1324 crore from Rs.1469 a year earlier. EBITDA for the cement business declined to Rs.278 crore from Rs.434 crore, according to reports, which attributed the decline to harsh market conditions and weak pricing. However, operating parameters are said to compare favourably with competitive benchmarks. The company said that market conditions are set to improve for the cement industry.

Read the article online at: https://www.worldcement.com/asia-pacific-rim/30042014/india_news_kesoram_industries_jk_lakshmi_cements_117/

Sinoma, with its subsidiary LNVT, has signed the last part of its Shree Digvijay contract in India and provides news on cement plant contracts in Iraq and Congo. 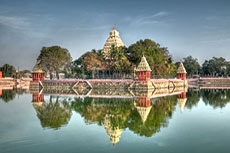 Indian cement demand increased by approximately 2% y/y in January – February 2014, with notable recovery in the northern, western and central regions due to a rise in construction projects.

The output of India’s core industries grew by 4.5% y/y in February. Cement, steel and coal are among the sectors that experienced increases.