There is a heightened liquidity risk surrounding Shanshui Cement Group and therefore a greater risk that the company could default in the next 12 months. This threat comes after its major shareholder was placed into receivership.

Due to these troubles afflicting the company, bonds were hit in secondary trade as Standard & Poor's cut its ratings.

Standard & Poor's have said in a report that Shanshui faces obstacles in its ability to refinance near-term debt. This is because since major shareholder China Shanshui Investment was put into receivership, some banks had decreased their credit lines to the company.

Read the article online at: https://www.worldcement.com/asia-pacific-rim/18062015/shanshui-cement-bonds-topple-32/

New research suggests that China may reach peak greenhouse gas emissions by 2025 or even earlier, which would increase global chances of keeping warming within the agreed limit.

China Shanshui Cement Group Ltd reported a 2.3% y/y increase in revenue and an 11.7% y/y improvement in cement sales volumes for 2013. 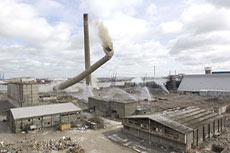 As part of the countrywide plans to mitigate China’s air pollution levels, the second round of cement plant demolitions has begun in Shijiazhuang, Hebei.

China is targeting heavy industries, including cement, in order to reduce its energy intensity and meet national targets.