Tabsakae Granite Co. Ltd operates a quarry and a concrete plant in the Prachuap Khiri Khan region of Thailand. The quarry aims to produce 50 000 t of aggregate each month, with around 40 trucks carting the aggregates away every day. The company has permission to operate at the 130 rai location for 10 years.

The plant is situated approximately 40 km to the south of Prachuap Khiri Khan, and 40 km away from the quarry, delivering concrete it’s within a 100 km radius. Another production line produces granite aggregate for use in dam protection in several regions of Thailand.

"Our clients come from Singapore, Bangladesh and Brunei because they prefer the high quality of our aggregates," explained Isun Atpaset, owner of the Tabsakae Granite Co. Ltd. The aggregate is also supplied throughout Thailand, with one interesting application being the planned lower east-west railway corridor, which is financed in cooperation with Japan. The railway line connects the planned Dawei Project in Myanmar (a deep sea port which is built to open up a new transport link between Southeast Asia and southern China) with ports in Vietnam and with China.

The first stage of granite production at the quarry is currently accomplished by hydraulic breakers and excavators. Upon obtaining permission, explosives drill and blast will be used.

"From the beginning it was very clear that I wanted to use a mobile crusher plant,” said Isun. Sandvik mobile crushers and screens were chosen. "Mobile Crushers and Screens from Sandvik give me the maximum possibilities for conducting my business", explained Isun. "The flexibility and the high production rates were very impressive arguments.”

Sandvik and PV Explosives have been able to provide support due to their extensive knowledge of the whole quarrying process, and through this were able to deliver the right mix of equipment, service and support.

Sandvik also provided support and advice, bringing different parts of the production process together. In addition to the equipment, professional training and advanced simulation programmes were used, drawing on data from numerous job sites from all over the world.

The crushers and screens used processing ballast from 63 to 25 mm, and concrete aggregates in fractions of 25 to 10 mm, and 10 to 0 mm. Cost effective production was ensured with the combined plant having low fuel consumption of around 100 l/hr. The plant currently works in closed circuit, in a ‘star formation’ designed to maximise the efficient production of the aggregates.

A mobile jaw crusher was at the start of the plant, with the QJ341 used at the quarry designed to operate in a variety of different conditions. Equipped with a single toggle jaw crusher, this heavy duty machine delivers high output producing aggregates of the highest quality. Designed to be able to work in rugged conditions, and being ideal for dealing with quarried materials, the crusher was the first choice of Isun Atpaset. The QJ341 weighs 48.2 t (which is in the lower weight-range of the Sandvik crusher models available - 35 to 135 t) and has an impressive 1200 x 750 mm wide jaw opening. This enables high output at high reduction ratios, with the modern intelligent design meaning tricky applications are easily dealt with. 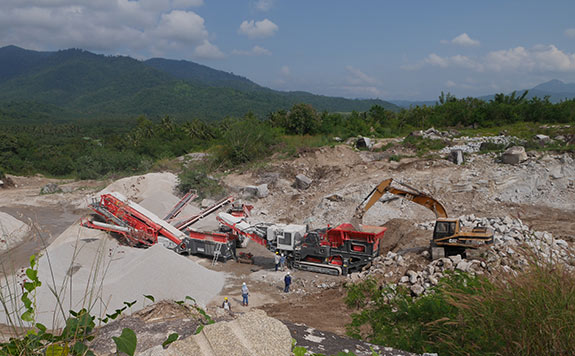 "The QH331 satisfies all my demands on the production of high quality aggregates," said Isun. At the centred of the QH331 is the CH430 cone. This is equipped with a hydroset system, which facilitates several adjustment functions.

Another feature on the QH331 is the remote camera. This enables viewing of the crushing chamber from ground level for ease of operation and operator safety. The powerful 350 hp / 261 kW engine of the 32.8 t QH331 delivers maximum power transfer with high production capacity, but simultaneously delivers low fuel consumption by using the efficient direct drive system.

The final unit of the crushing and screening system was the QA451 Doublescreen, which features Sandvik’s patented Doublescreen technology. This system enables an increase in throughput, control and screening efficiency due to the two inline independent screenboxes. The QA451 has two screenboxes, each 3 x 1.5 m, a large hopper and extended conveyor belts. When used in conjunction with the tracked crushers, the QA451, as well as other Sandvik mobile screeners, is able to work in closed circuit operation. If in future an extension to the plant is needed, a fourth unit may be easily added. Facilitating enhanced production, the feeding position to this fourth upstream unit can be optimised by slewing, raising or lowering the fourth conveyor hydraulically.

By mid-2016 at the latest, plans are in place to move the whole mobile crushing and screening plant from the current site to another location. With the decision made to operate a mobile plant, Tabsakae Granite Co. Ltd now possesses a flexible solution.

Read the article online at: https://www.worldcement.com/asia-pacific-rim/15022016/mobile-plant-delivers-high-quality-aggregate-production-503/