Akinwumi Adesina, President of the African Development Bank Group, has said that the adoption of the Paris Agreement shows that ‘the world understands that with climate change there are no winners and no losers. Either we all win together, or we all lose together’.

Commenting on the impact of the agreement on Africa, he added: “African countries came to COP21 well prepared with a unified narrative, a clear agenda, and a bottom line for a fair deal.”

“While the Agreement may not be perfect, it has largely reflected Africa’s specificities, while accommodating the needs of other developing regions. I have always said that a deal that is not good for Africa is no deal at all,” he said.

The Africa Group of Negotiators went to Paris with two initiatives that would contribute to achieving the expected outcomes of the Paris Agreement, Adesina said.  These were the Africa Renewable Energy Initiative and the Africa Adaptation Initiative. Both initiatives were launched at the COP, and the Africa Renewable Energy Initiative has received strong support and financial pledges from partners. The Paris Agreement further acknowledges the need to promote universal access to sustainable energy in developing countries, in particular in Africa, through the enhanced deployment of renewable energy.

“While the Agreement is indeed ambitious, we cannot rest on our oars,” Adesina concluded. “There is much more work to be done. Assessments have shown that current commitments in the Intended Nationally Determined Contributions (INDCs) will result in global warming of about 3oC. The Agreement includes a pledge to review and strengthen commitments every five years. It’s just the beginning. We need to build on its momentum to ensure that Africa transitions to a low-carbon and climate-resilient development pathway. The will is there. The commitment is there. This window of opportunity will not be open for much longer.  Let us seize it.”

Read the article online at: https://www.worldcement.com/africa-middle-east/15122015/afdb-either-we-all-win-together-or-we-all-lose-together-181/ 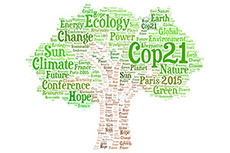 BSRIA said the government must support industry if it is to meet the 1.5°C warming target.

On 8 December, members of the WBCSD Cement Sustainability Initiative will pledge to reduce CO2 emissions by 20 – 25% by 2030 compared to business as usual.

The African Development Bank is attending COP21 with the message ‘those who pollute more should do more to save our planet’.