Read Part One of this article here.

CIMAT’s Ben Ahmed plant was selected for the project start. The introduction was implemented within the framework of a KPI project, in which all works processes were analysed first. Weak points and bottlenecks could be identified and eliminated with the aid of VAS logistics, for example through detailed reports over the hold-up time of the trucks at all positions in the works, where optimisation potentials are indicated. In order to tackle the problem of waiting times, a transparent ‘Waiting List’ was initially drawn up. In this case, all trucks must identify themselves on entry into the facility. This is implemented using a card with a barcode that is read out with the aid of a reading device, which is located in a stainless steel column at the works gate.

Simultaneously, however, there was also the possibility to issue cards with temporary validity, for instance for auxiliary drivers. The parties responsible structured the subsequent flow throughput in the works on a first come, first served basis. For the truck drivers, there is a waiting list available that is displayed over a monitor in the trucker lounge and an LED display at the entrance gate. The factory employees can access the list of the vehicles from every PC and, therefore, everywhere in the plant. 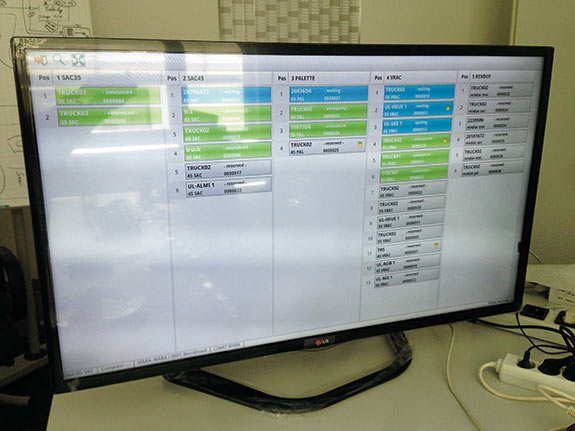 In order to enable the structure of an expressive key indicator basis for the KPI system, individual time stamps for every vehicle are registered before and after every position in the plant, with the aid of mobile hand-helds, for instance, with the weighing or the loading. The individual times are then evaluated, aggregated and processed in the form of graphic reports. If the pointer is in the green area on all three scales, everything is functional. If the pointer is in the yellow or red fields, action is required. “In this way it is possible to identify at a glance where the weak points are in the work flow. Therefore, we can intervene at any time in the short-term. At the same time, the system provides us with the basis for further improvement of the logistic process in the works in the medium-term, for instance, through the structure of additional stations and lines, or other changes to the infrastructure,” explained Lahbara.

As early as October 2013, VAS began operations as planned in the Ben Ahmed plant. However, there were initial acceptance problems with both the drivers and with security, as well as the other plant employees. Despite this, said Lahbara, these problems are to be expected and are normal with such a project. With support from FRITZ & MACZIOL’s project team, who accompanied the project from the outset, uncertainties and reservations with regard to the new system were taken care of quickly and effectively.

To begin with, only the standard option of the package was installed. “The advantage of the solution is that it is modular and open, and can be extended at any time. Since we wanted to represent both works identically, it made sense for us to go one step at a time,” explained Lahbara. The Béni Mellal plant followed in the first half of 2014, with productive operations commencing in August. It is now possible to compare the processes in both facilities and to form a benchmark by means of which further optimisation potentials can be identified. The objective is the gradual application of full automation in the logistics of the two plants – including the integration of the central SAP system and GPS truck tracking.

Written by Sabine Maier, FRITZ & MACZIOL, and Rachid Lahbara, CIMAT. This is an abridged version of the full article, which appeared in the November 2014 issue of World Cement. Subscribers can view the full article by logging in.

Read the article online at: https://www.worldcement.com/africa-middle-east/06112014/logistics-optimisation-part-two-790/ 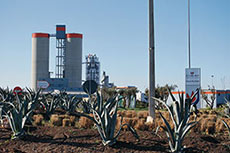 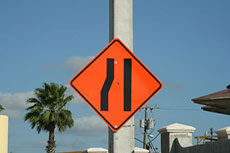