The Cement Association of Canada has announced its support of the government of Ontario’s renewed commitment to developing “new alternative fuel rules in 2014 to help big, energy-intensive industries reduce their GHG emissions.” This forms part of the government’s plan for ‘Moving Forward on Climate Change’ and of Premier Kathleen Wynne’s mandate letter to Glen Murray, Environment and Climate Change Minister.

The CAC notes that: ‘Bringing Ontario’s regulatory framework for alternative fuels in line with leading practices globally will help provide the certainty needed to support significant investments in Ontario’s plants, bridge the gap with Europe and other jurisdictions (where fuel substitution rates are over ten times higher than in Ontario), and make a significant contribution to Ontario’s GHG reductions goal.’

“Premier Wynne’s government is demonstrating leadership on climate change, promoting solutions that are good for both the environment and the economy,” commented Michael McSweeney, CAC President and CEO. “We look forward to working with Minister Murray and the environmental community to continue our industry’s progress on reducing greenhouse gas emissions and other air pollutants.”

Read the article online at: https://www.worldcement.com/the-americas/30092014/cement-association-of-canada-welcomes-ontario-govt-new-af-rules-commitment-577/

The Cement Sustainability Initiative has released an updated version of its ‘Guidelines for Co-Processing Fuels and Raw Materials in Cement Manufacturing’. 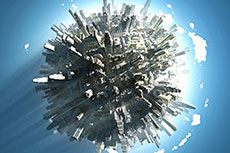 Winners were selected out of a total of 31 finalists from around the world, each recognised for excellence in a specific area of climate action.

Lafarge Canada Inc. has measured the building footprint of its new Innovation Hub in Edmonton, Alberta and created an Environmental Building Declaration.