Wasting time. Wasted energy. Wasteful spending. Regardless of industry, waste is one of the most detrimental and costly factors in a business. One New Mexico-based construction company was able to turn what used to be tons of waste into big profit and downtime into high output with the help of a single crushing machine from IROCK Crushers – the IROCK RDS-15.

Ramirez & Sons was formed in 1982 and is built on generations of industry experience dating back to the 1920s.

Ramirez & Sons is a family-owned company, formed in 1982. The company is built on generations of industry experience, dating back to the 1920s. Now led by fourth-generation professional contractor, Alonzo Ramirez Jr., Ramirez & Sons is the second largest paving and aggregate provider in southeastern New Mexico, and employs more than 65 professionals at its corporate office in Hobbs, New Mexico.

Ramirez & Sons began as a general earthwork and construction company, serving a client base of both municipal and private contractors in Hobbs, Lovington and surrounding areas. Today, the company offers general excavation, site prep, highway paving, and both water and sewer utility work. In 2010, the company enhanced its capabilities even further with the addition of its first hot-mix asphalt plant. In addition to contracting services, Ramirez & Sons also sells material for use in hot-mix asphalt, building pads and as base layers for road building. This side of the business is led by Ken Smith, plant manager and crushing/hot mix superintendent.

The Ramirez & Sons paving crew is ready to lay down the asphalt material being dumped into this Vogele Vision 5203-2 paver.

More materials could be recycled, such as concrete

“Historically, the company has been primarily involved in asphalt recycling,” Smith said. According to him, Ramirez & Sons had previously produced four different size materials: 3/4 in., 3/8 in., fines and base coarse. The company both sold the material and used it in its hot-mix plant for its own paving work. While asphalt recycling has certainly brought value to the company, Smith felt there was more material he could be offering, and that substantial money was being left on the table.

“We were wasting a lot of material,” he said. Because the company was only recycling asphalt, it was missing out on other saleable materials, particularly concrete. Recycled concrete and other aggregates can be utilised in many applications, and being able to provide high-quality material would potentially bring new customers to Ramirez & Sons. Not only that, he figured the company would be able to use the material in its own operation, cutting time and costs associated with outside material purchasing. 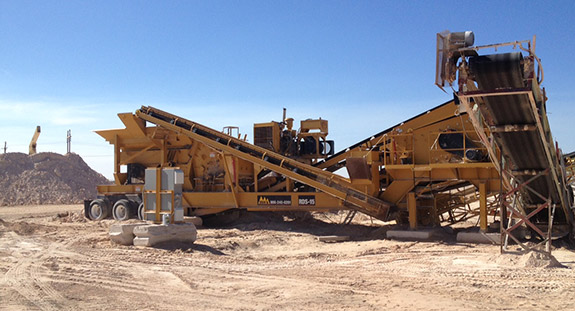 A concrete pile in the distance soon to be crushed and screened by the IROCK RDS-15, which will process the stack into several grades of usable material.

While the benefits were clear, Ramirez & Sons simply wasn’t in a position to make a move; the company’s crusher was not able to process concrete and other aggregates. Without the right crusher, the company lacked the versatility needed to enter into concrete and aggregate processing services.

Hand in hand with that, Smith also noted that production rates weren’t as high as he felt they could be, coming in at a daily rate of roughly 120 tph. The equipment should have been producing more, but there were a lot of issues with breakdowns and excessive downtime. Again, it wasn’t as simple as sheer output volume. End-product quality was not up to par either, and a lot of potentially usable material was being left as waste. That all changed when Smith met with Ramirez & Sons’ longtime equipment dealer, Warren CAT, to explore new machines that could amp up production and allow the company to offer larger amounts of more saleable material.

Read more in part two of this article, written by IROCK Crushers.

Read the article online at: https://www.worldcement.com/the-americas/30072015/part-1-the-irock-rds-15-increases-output-and-profits-240/

The European Cement Association has responded to the European Parliament’s report on moving towards a circular economy. 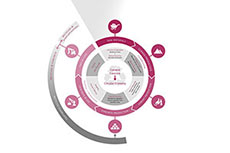 Cuddy Recycling Ltd has received financial backing from the Welsh Government to build a centre to recycle demolition aggregates from construction and demolition projects.