Cemex, S.A.B. de C.V. has announced its position on climate change, by reaffirming its commitment to the recently signed Paris Agreement. Cemex agrees with the vast majority of the scientific community that the benefits of mitigating global warming will by far outweigh any costs to achieve this goal, and welcomes the ambitious targets, the bottom up commitments from signatory Countries, and the prominent role of market mechanisms in the Paris Agreement.

For almost a decade, Cemex has publicly called for a global carbon market as a key instrument to combat climate change. As one of the initial members of the Carbon Pricing Leadership Coalition (CPLC) and as co-chair of the Cement Sustainability Initiative (CSI), Cemex is a leading contributor to global warming reduction efforts worldwide.

Aligned with the cement industry’s action plan presented at COP21 to help tackle climate change, during 2015, Cemex avoided almost 7.5 million t of CO2 emissions—equivalent to the average annual emissions of 1.4 million cars—as a result of its initiatives to reduce its clinker factor, increase the use of alternative fuels, and lower its indirect emissions through the utilisation of power from clean energy sources.

“At Cemex, we welcome the ambition of the Paris Agreement and the prominent role that market mechanisms play in it. However, this is just a first step,” said Fernando A. Gonzalez, Chief Executive Officer of Cemex.

“Combating global warming will only be possible with significant efforts by all sectors of society, and it will require a transformation of our infrastructure that is both more carbon-efficient and resilient.”

Additionally, Cemex is publishing the progress on its initiatives to mitigate global warming, as well as its achievements to build a sustainable future through its 2015 Sustainable Development Report, released for the 13th consecutive year. The report includes an external limited assurance statement by PricewaterhouseCoopers for the 10th consecutive year, as well as a statement from the company’s Sustainability Reporting Advisory Panel.

To better align its report with stakeholder’s main interests, Cemex prepared its 2015 Sustainable Development Report using the GRI-G4 Guidelines, opting for the “in accordance” Comprehensive option, and requesting the Global Reporting Initiative to conduct the Materiality Disclosures Service.

Read the article online at: https://www.worldcement.com/the-americas/29042016/cemex-committed-contribute-low-carbon-future-8/ 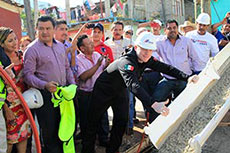 Cemex announces the global integration of an advanced SAP platform and the signing of a 10-year IBM service contract.

Cemex’s bid to take over Hyderabad-based Penna Cement hangs in the balance as both companies have been unable to arrive at an acceptable valuation.