Cementos Argos has actively participated in the construction of the Panama Canal expansion, working for over a year on the development of an innovative product that had to meet specific technical characteristics such as durability, resistance to sulfates and low heat of hydration.

In 2010, Argos initially signed with the Consortium of Grupo Unidos por el Canal, a company that was awarded the design and construction of the third set of locks, a contract worth US$65 million dollars which was later expanded to US$92 million dollars given the magnitude of the project and the high standards of service offered by the company.

To adequately supply bother he local market and the Canal expansion project, Argos Panama doubled its production capacity by 1.2 million tpy. Its logistics network and interconnection capacity allowed it to leverage the synergy created to efficiently transport the special clinker, developed in its Cartagena plant, before being transformed into cement in the Central American country.

"We are extremely pleased and proud to be part of this historical legacy that will be delivered to the world. We consider that this expansion is one of the most important infrastructure projects in Latin America, is an iconic project for Panama and for the continent, and we are honoured to have been able to fulfil all delivery and quality requirements demanded for a project of such magnitude,” added Juan Esteban Calle, Cementos Argos CEO.

In sum, in 2013 Argos reached the highest peak of shipments to the expansion project and in September 2012 the largest number of product deliveries was reached on both sides of the Canal expansion: Pacific and Atlantic, more than 38 000 t were shipped and up to 65 trips were made in a single day.

Read the article online at: https://www.worldcement.com/the-americas/28062016/cementos-argos-participates-in-panama-canal-expansion-415/

Joe Accetta, President of Kalenborn Abresist Corporation, has announced that he will be retiring in May 2016. 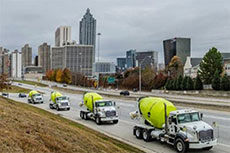