A drop in demand and an increase in capacity is a familiar scenario for the cement industry, but today the same is being seen by the shipping industry. According to a New York Times report, more than one tenth of vessels are idle thanks to lower demand and an influx of new container ships.

2009 was not a good year for the industry, which saw a dramatic downturn in orders. Several smaller firms closed down altogether, while it is estimated that the major carriers lost some US$20 billion. Like with so many industries, shipping companies are paying the price now for investing too heavily during the boom times in expansion that has proved unnecessary.

Container traffic has been particularly subdued since the onset of the recession. Despite the beginnings of a recovery, demand will remain low as consumers maintain their caution. Overcapacity is particularly affecting this sector of the shipping industry, and many companies are trying to cancel orders for more container ships, at significant cost. Bulk carriers and tankers – the types of ships used to transport, for example, cement, coal, oil and gas – are faring slightly better. Developing nations are seeing an increasing demand for freight, particularly building materials, which bodes well for bulk carriers. China, the world’s largest exporter, reported the first increase in 14 months for December: exports were up 17.7%. Drewry Shipping reportedly expects a 2.4% increase in global trade volume in 2010 – considerably better than the 10.3% decline experienced in 2009. However, it will take more than this to return the industry to its former position. Previous downturns have seen the shipping industry take as long as a decade to recover.

Read the article online at: https://www.worldcement.com/the-americas/26012010/shipping_industry_waits/ 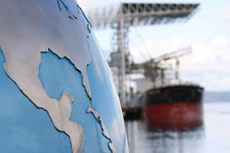 Around the world, large volumes of cement are traded by multinational cement groups and their subsidiaries, whilst independent cement traders still have a major function when it comes to price levels and patterns of trade.