We don’t always need an ignition source. Some materials can spontaneously ignite. Coal is one example. Coal in an open stockpile can be exposed to atmospheric moisture. The moisture condenses into water vapour on the coal. The coal adsorbs the water vapour and creates oxidation at the surface of the coal particle. Imagine what can happen if that coal particle is buried several metres beneath loosely packed coal:

The US Department of Energy recognised the dangers of this process years ago:

Such fires can be very stubborn to extinguish because of the amount of coal involved (often hundreds of tons) and the difficulty of getting to the seat of the problem. Moreover, coal in either the smouldering or flaming stage may produce copious amounts of methane and carbon monoxide gases. In addition to their toxicity, these gases are highly explosive in certain concentrations, and can further complicate efforts to fight this type of coal fire.

Even the most universal firefighting substance, water, cannot be used indiscriminately. Because of the remote possibility of a steam explosion, it is advisable that water be applied carefully and from a safe distance. Certain chemicals such as carbon dioxide or nitrogen may mitigate fire effects, but their use has had mixed success from a DOE perspective. The above information suggests that coal fires require awareness and prior planning to extinguish efficiently, completely, and safely.4

The classic example of spontaneous combustion of coal occurred on board the RMS Titanic. Yes, that Titanic. Testimony of coal stokers that survived the sinking of the Titanic indicated twelve men were involved in fighting a coal fire from the day the ship left Southampton, England, until it was sunk by an iceberg five days later.4

Instead of a combustible dust explosion being at the end of the process, all too often it’s just the prelude to the real disaster. The force of an initial combustible dust explosion typically triggers a far larger and far more destructive explosion: a secondary explosion. The initial combustible dust explosion generates an even larger cloud of uncombusted and unexploded material. How? By shaking off material that’s accumulated on surfaces throughout a building; beam flanges, rafters, equipment housing, etc. With this new larger dust cloud, provided there’s still confinement, the even greater cloud of material explodes with devastating effect. In almost all cases, this secondary explosion is the force that knocks walls down, tears open combustion vessels, blows roofs off, and causes tragedy among workers.

But the process isn’t complete yet. The secondary explosion can continue to propagate through piping and duct work to virtually any area of the plant connected to that ducting.5

Cement plants have been safely handling combustible dusts in the form of pulverised coal and petcoke for decades, but new environmental regulations are introducing new materials and that requires new thinking, new procedures and new training. Activated carbon is just one example of the new materials. A common measure of a combustible dust’s explosibility is its dust deflagration index or Kst. Kst values less than or equal to 200 are classified as weak to moderately explosible; Kst values of 200 to less than 300 are strongly explosible, and Kst values of 300 to less than 800 are very strongly explosible. Activated carbon has a Kst value of 80, which characterises it as a weak explosive material but yet one that can still explode. In comparison, bituminous coal has a Kst value of 129.

But Kst isn’t the only measurement of concern. Other measured properties of combustible dust include: Pmax, the maximum explosion overpressure generated in a test chamber; (dP/dt)max, the maximum rate of pressure rise; MIE, the minimum ignition temperature; MEC, the minimum explosible concentration; LOC, the limiting oxygen concentration; ECT, the electrostatic charging tendency.2,5

4. US Department of Energy, The Fire Below: Spontaneous Combustion in Coal, DOE/HE-0320, Environment Health and Safety Bulletin, Issue No. 93-4, May 1993.


This is part two of a three-part article written by Rick Bohan for World Cement’s April 2015 issue and abridged for the website. Subscribers can read the full issue by signing in, and can also catch up on-the-go via our new app for Apple and Android. Check back tomorrow for part three of the article on www.worldcement.com.

Read the article online at: https://www.worldcement.com/the-americas/25122015/the-dangers-of-dust-part-two-4/

PCA and FLASH will rebuild a family home destroyed by Superstorm Sandy. 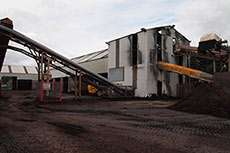