“The results that were recorded for this second quarter came from a solid demand in most of the geographies in which we operate. It is especially satisfactory to see the recovery of profitability in the US, the successful integration of the company’s recent acquisitions and the strategic advantage that Argos draws from the fact that it operates in 12 countries, with dynamic markets and different economic cycles,” said Jorge Mario Velásquez, CEO of Cementos Argos.

In the US, the EBITDA generated during 2Q14 was nearly twice as high as the EBITDA recorded for FY13. The country’s outstanding performance was driven by increasing sales volumes during the first half, with an upturn of 59% for cement dispatching and 27% for concrete, which exceeded the expectations for recovery in the American market, and especially in the states in which the company is present; the latter even grew more than the country’s average.

In Colombia, for its part, Argos recorded increases of 3% and 7% for cementitious materials and concrete, respectively. Revenues amounted to more than US$604 million for 1H14, which was a result similar to the one recorded in 2013. During this period, the company recorded a larger increase in sales of the bulk cement segment and in concrete dispatching, as well as positive trends in housing construction, thanks to the approval of an increased number of building permits, the continuation of mortgage subsidies and the first awards of contracts for the 4G projects. One of the main highlights is the starting up of operations at the Cartagena Distribution Centre, which allows the company to compete even more efficiently in the northern region of the country.

In the Caribbean and Central American regional division, revenues rose by 20% and EBITDA improved 38% in 1H14, reflecting the positive effect of including the results of operations in Honduras and of the grinding facility in French Guiana.

“As we are well aware of the opportunities and the positive trends in the countries of our target region, we have been able to grow through acquisitions and the expansion of our operational capacity in order to service these markets more competitively and satisfy the growing demand for cement and concrete. It is without a doubt this strategy that has lead to the results we are seeing now,” concluded Velásquez.

Argos, one of Latin America’s biggest cement producers, has agreed a deal with SKF, whereby the latter will provide engineering products and services for Argos’ cement plant operations in Colombia.

Argos grew in a profitable way in all its regional divisions during the first quarter of 2014, posting a 52% y/y increase in net income and an 18% y/y rise in revenue. 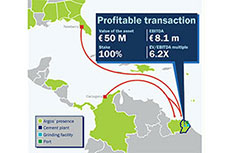