Profit before income taxes was US$145 million for 1Q16, compared with US$187 million for 1Q15. The decrease was primarily due to a US$17 million decrease in net yield on average earning assets reflecting geographic mix changes and currency impacts, an US$11 million increase in provision for credit losses and a US$10 million unfavourable impact from lower average earning assets.

During 1Q16, retail new business volume was US$2.29 billion, a decrease of US$173 million, or 7%, from 1Q15. The decrease was primarily related to lower volume in the mining and marine portfolios.

"Our portfolio has performed well overall despite ongoing weakness in many of the key end markets we serve," said Kent Adams, president of Cat Financial and vice president with responsibility for the Financial Products Division of Caterpillar Inc. "The global Cat Financial team is focused on actively managing portfolio health and continuing to serve Caterpillar customers and Cat dealers worldwide through financial services excellence." 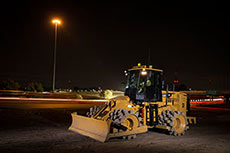 Caterpillar Inc. and the Caterpillar Foundation have donated US$500 000 to The Finca Vigia Foundation to restore and preserve Hemingway’s home.

Caterpillar Inc. has published its annual Year in Review and Sustainability Report