Its Superior Plant, located on the Lake Superior waterfront in Wisconsin, is ideally positioned to service the upper Midwestern states and Central Canada. Three types of limestone are calcined at the Superior facility to produce high calcium quicklime, high calcium hydrated lime, dolomitic quicklime and PCC quicklime. In addition to calcined lime products, the plant is also a major supplier of finely ground limestone for various mining and manufacturing processes throughout the Midwest. 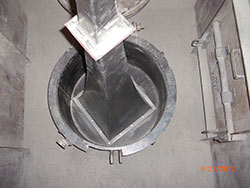 One of the installed acoustic cleaners at the Graymont plant at Lake Superior.

The Superior plant has five kiln lines that need to be shut down periodically for cleaning and maintenance. When this happens, the ESPs need to be cleaned to bring their removal efficiency back up for the next production run. Cleaning the ESP is a manual operation that entails employees entering the bottom hopper to hammer on the individual plates. This poses a significant safety risk to the employees because they are below the plates and therefore, the dust that they are knocking off is falling down on them. Lime dust can burn areas of exposed skin. In addition, the area that they are working in is both hot and cramped.

The original emphasis for installing the acoustic cleaners in the ESPs was to reduce risk and exposure to employees that are tasked with cleaning the ESP on shutdowns. Typical cleaning time for an ESP with three employees was around 16 hours prior to installing the acoustic cleaners. Even though employees would wear full-faced respirators, the ash and dust was continuously falling on them. Graymont’s Process Engineer, Bill Kaptonak, needed to find a better cleaning solution, however not being familiar with acoustic cleaners he was a little hesitant in placing an order with Primasonics. His concern was allayed when Primasonics outlined their Acoustic Cleaner Rental Plan, which offered Graymont the opportunity to rent the acoustic cleaners on a monthly basis before committing to purchase. Initially two acoustic cleaners and ancillary equipment were rented from Primasonics and installed in Graymont’s #3 ESP in late 2012. The ESP’s are designed to remove fine particulate dust from the lime kiln operations prior to discharge to the atmosphere. As such, they are critical to maintaining emissions below permitted air limits. The ESP has large electrified plates that attract dust particles. As the dust builds up on the plates, a mechanical rapper system knocks the dust off the plates and into a hopper below.

The range of Primasonics Acoustic Cleaners.

The effectiveness of the two acoustic cleaners in the Kiln #3 ESP has prompted the plant to purchase a total of six acoustic cleaners, which will be installed in Kiln #2 and Kiln #3. The plant is currently considering additional future applications for Primasonics Acoustic cleaners.

Read the article online at: https://www.worldcement.com/the-americas/25022014/primasonic_supplies_acoustic_cleaners_to_graymont_802/

Fifteen US organisations have joined forces to campaign for more federal support of minerals science and information services.

The conference will include new professional training, with over 20 sessions on a range of topics.

Primasonics has dispatched Acoustic Cleaners to Bangladesh, bringing the number of countries to which the company has exported to a total of 57.