Thirty years ago, Atlas Copco equipment helped to unearth an unnamed dinosaur that died between 100 and 120 million years ago.

In commemorating the 30th anniversary of the discovery of Atlascopcosaurus, Sofie Gielen, marketing communications director, said: “Not every company has a dinosaur species named after it. Three decades later, we’re still extremely proud of the fact that our equipment helped unearth the fossilised skeleton of Atlascopcosaurus so it could be shared with the entire world.”

Atlascopcosaurus was an estimated 6.5 – 13 feet long and weighed 276 lbs. The dinosaur belonged to the Hypsilophodontidae family and lived during the early Cretaceous Period. Scientists infer that it was a small, bipedal herbivore that would have foraged for its food and stayed out of the way of larger, carnivorous predators. 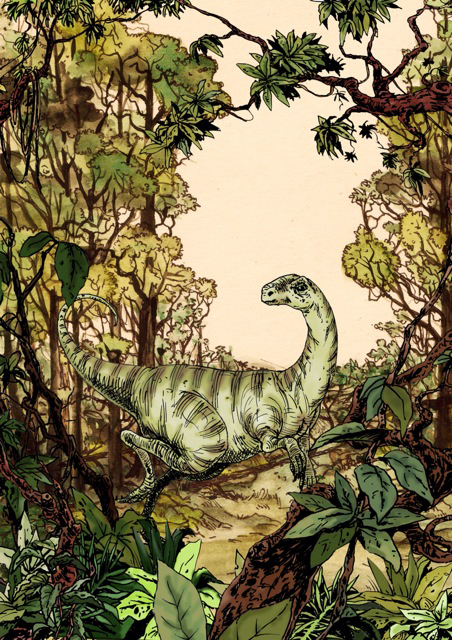 The Atlascopcosaurus was discovered 30 years ago at Dinosaur Cove, Australia.

Thomas H. Rich, PhD, a paleontologist from the Museum of Victoria, Australia, and Patricia Vickers-Rich from Monash University, Melbourne, discovered Atlascopcosaurus at Dinosaur Cove, a fossil-rich area on the southeast coast of Australia, close to Victoria. During Rich’s first visit to the area in 1980, he and two colleagues revealed fragments of rock-embedded bone. Four years later, a group of hundreds of student volunteers, paleontology scientists and miners began excavations.

The research group's equipment included Atlas Copco rock drills, pneumatic tools and compressors. The digging teams often worked in dark, narrow tunnels, which at times were muddy and slippery. The excavation site was located next to a steep cliff overlooking the sea, which complicated work even further. The fossils they were after were embedded in layers of sand, mud and clay that had been pressed together into hard rock for millions of years. It was slow going, with the teams removing approximately 66 lbs of hard rock for every 2 lbs of dinosaur bone.

Ultimately, the excavation revealed Atlascopcosaurus loadsi. The specific name loadsi refers to Bill Loads, Atlas Copco's manager in Victoria who made the decision to support the project.

When Rich and Vickers-Rich named the fossil in 1989, they looked to the company whose equipment and expert assistance was so instrumental in the success of the dig. Rich said he was grateful for the support Atlas Copco provided and impressed with the reliability of the equipment. “It was because of that record of reliability that, in 2007, I insisted on using Atlas Copco equipment during a dinosaur excavation from permafrost in a tunnel on the North Slope of Alaska.”

Read the article online at: https://www.worldcement.com/the-americas/15082014/atlas-copco-celebrates-anniversary-of-the-atlascopcosaurus-dinosaur-301/