In 4Q15 Sika achieved accelerated sales growth of 8.3%, with the total sales for the year rising 6.2% in local currencies. All regions contributed to growth, as did investments in new factories and national subsidiaries.

The targets set out in Strategy 2018 have been revised upwards as they have now been met. Sika is now aiming for an EBIT margin of 12 – 14% and an operating free cash flow in excess of > 8%. The company is also aiming to increase its return on capital employed to 25% by 2018.

All regions achieved significant sales growth and market share gains during 2015, with double-digit sales growth in the core markets of the USA, Mexico, Africa, the Middle East, Southeast Asia and the Pacific. Group sales were up 6.2% at constant exchange rates, with sales rising by 7.4% excluding the negative growth in the Chinese market.

New factories were opened in all regions, continuing the targeted development of growth markets. In the EMEA region, the expansion of production capacities through new factories in Dubai, Nigeria, Ivory Coast, Russia and La Reunion, will provide additional future growth stimuli in the region.

Sika also established new national subsidiaries in Tanzania and Ethiopia. In Latin America, new factories were opened in Paraguay and Argentina, while in North America, Sika expanded its production capacities by adding new facilities in Philadelphia. In the Asia/Pacific region, Sika opened its first factory in Sri Lanka, with a national subsidiary established in Myanmar.

Jan Jenisch, CEO: "We are delighted that our growth strategy continues to be successful despite the deteriorating market conditions worldwide. Our thanks go to the 17 000 employees whose competence and commitment have brought us another record result. We continued to systematically implement our expansion strategy throughout the last business year by investing in nine new factories and three new national subsidiaries, which will provide growth stimuli in the future. We expect an above-average increase in the operating result and an EBIT margin of 11.5–12.0% for full-year 2015." 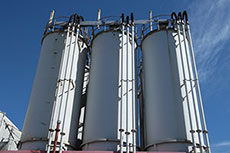