The Cement Association of Canada (CAC) has called on the government in British Columbia ‘to once and for all change how the carbon tax is applied to the cement sector to address the unintended consequences of the tax and to ensure a sustainable industry that provides family-supporting jobs’.

“The cement industry wants to be part of the solution to climate change through equitable application of the carbon tax,” stated CAC President and CEO Michael McSweeney. “We continue to push the government to live up to its own Budget 2013 and B.C. Standing Committee on Finance recommendations to examine the carbon tax and address the devastating impact on the cement industry.”

According to the statement released by the CAC: ‘After six years of inaction by this government, local producers have lost nearly a third of the market share to imports since the inception of the carbon tax in 2008. Imported cement coming from the US and Asia is exempt from carbon tax. This creates an unfair advantage for foreign producers, having a negative impact on climate, the Jobs Plan and investment in B.C.’

“The cement industry is vital to develop the required infrastructure for an LNG industry, mines, the Site C clean energy project, and the roads and bridges that keep our economy moving,” added McSweeney. “B.C. is the only jurisdiction in the world that does not recognise Energy Intensive/Trade Exposed industries like cement and concrete”.

Over the last five years, capacity in B.C.’s cement industry has fallen from almost full capacity to 65%. The sector traditionally employs around 2000 jobs in British Columbia, which the CAC believes will be put at risk. “We have been working with government officials for six years, and will continue to do so, but our industry is running at a disadvantage while we wait for the government to take action. The B.C. Carbon Tax was designed to protect our environment, not to displace business and employment to jurisdictions that do not share B.C.’s commitment to fighting climate change,” said McSweeney who confirmed that the local cement industry remained open to working with the government.

Read the article online at: https://www.worldcement.com/the-americas/12052014/cac_calls_for_carbon_tax_changes_in_british_columbia_176/ 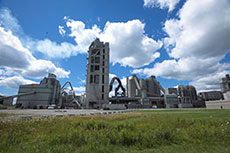 The Portland Cement Association has applauded the US Court of Appeals for the District of Columbia Circuit for its support of the EPA’s revised Portland cement NESHAP standards.

The final part of this abridged article outlining the importance of CEMS for cement plants in the US trying to meet NESHAP standards.