PCA’s bright economic outlook has recently been made brighter. Low oil prices are beneficial to US economic growth and are expected to add 20 to 30 basis points to real GDP growth rates during 2015 – 2016. While low oil prices support stronger national economic growth, it will disrupt regional growth among energy producing states. Most of the potential benefit to economic growth arises from stronger consumer spending, which accounts for roughly 70% of US economic activity. PCA estimates that stronger oil induced net economic growth conditions will add a net 220 000 additional jobs in 2015 and slightly more in 2016.

The impact of low oil prices is not entirely beneficial. Oil prices will adversely impact oil-producing regions. The decline in oil prices will also impact competing fuels such as natural gas, which will also adversely impact economic activity in these regions but to a lesser degree than oil. PCA estimates that drilling activity could decline 20% – 37% during 2015 depending on the producing region.

Even taking these adversities into consideration, the net improvement in economic activity resulting from lower oil prices will impact the underlying construction fundamentals. Unfortunately, the transmission process from oil price declines to construction activity contains timing lags. It takes time, for example, for oil prices to impact consumer/business behaviour, which in turn impacts decisions to build. The length of the time lag associated with the transmission processes varies from 6 to 35 months. Given the length of the lags, little of the potentially positive impacts for construction activity resulting from lower oil prices will materialise in 2015, or even during the first half of 2016.

While the positive impacts for construction activity associated with the decline in oil prices may not occur immediately and be relatively muted, the negative impacts could be more substantial and are likely to occur more quickly. The impact of falling energy prices is expected to be more pronounced, with an immediate adverse affect on individual oil producing states.

The economy is expected to expand at rates of 3.2% to 3.5% during 2015 – 2016. Inflation is expected to remain in check. Lower near term inflation suggests a slower achievement of the Federal Reserve’s 2% inflation target. This potentially enlarges the window before the Federal Reserve engages in tightening – adding to a more favourable interest rate environment for 2015 – 2016 compared to PCA’s fall forecast. Expected increases in the Federal Funds rate could also be smaller in magnitude and the subsequent ramp-up could be slower. These conditions, coupled with strong labour markets, provide reasons to expect construction activity will grow at a rate of nearly 7% during each of the next two years. Accounting for intensity gains, cement consumption is expected to grow at a rate of nearly 8% during the same timeframe. These estimates translate into 93 million t in 2015 and 100 million t in 2016.

At these projected volumes, capacity utilisation rates will run high. Some plants temporarily shuttered during the recession may become candidates for re-opening. Imports will grow. Employment in the industry will expand. Riding on the back of a strengthening economy, the United States cement industry is making a firm and sustained recovery.

Yes, something is in the air. Take a deep breath. It tastes sweet.

The USGS has released its Mineral Industry Survey for cement in the US and Puerto Rico in December 2015 and full-year 2014. 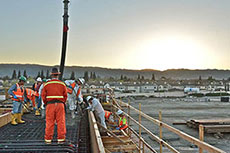 “These two projects are testimony to our technical expertise and our commitment to building a better future for our customers and in the communities in which we operate," said Karl H. Watson Jr., President of Cemex in the USA.

The award recognises Mike’s dedication to the construction aggregates industry, his family and his community.

The Portland Cement Association has called on the US Environmental Protection Agency to support resilient infrastructure construction.