According to the latest USGS Mineral Industry Survey, production of construction materials in the US in 4Q14 was around 18% lower than in 3Q14. This figure includes cement, construction sand and gravel, and crushed stone combined. Meanwhile, production of gypsum increased by 3% q/q. In 2014, production of these mineral commodities was approximately 8% higher than in 2013.

Compared to 3Q14, US production of lead and zinc grew by 3% and 7%, respectively, in 4Q14.  Production of aluminium, copper, gold, molybdenum and silver fell by 1%, 9%, 5%, 3% and 7% q/q, respectively. For the majority of these metal commodities, production volumes increased between 6% and 11% y/y in 2014. The exceptions are gold, which decreased by 8% y/y, and aluminium, which remained unchanged.

Read the article online at: https://www.worldcement.com/the-americas/10032015/usgs-releases-mineral-commodities-survey-4q14-486/

The Portland Cement Association has called on the federal government to introduce a fully-funded surface transportation bill that would address the impact of both extreme weather conditions and general wear and tear. 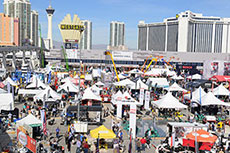 Increased number of exhibitors and participants at World of Concrete 2015, which took place in Las Vegas earlier this month.