Colombian cement and concrete producer Argos has announced an agreement with Lafarge for the acquisition of Ciments Guyanais in French Guiana. The transaction, which is subject to the necessary approvals, is worth €50 million. The purchased assets comprise a 200 000 tpa clinker grinding facility and a port in Dégrad des Cannes, near the capital city of Cayenne.

The purchase is in line with Argos’ expansion strategy and follows the recent acquisition of assets in the US and Honduras. The clinker grinding facility and port in French Guiana will enable Argos to strengthen its presence in the Caribbean, whilst complementing its existing operations in Suriname and its terminals in the Antilles. 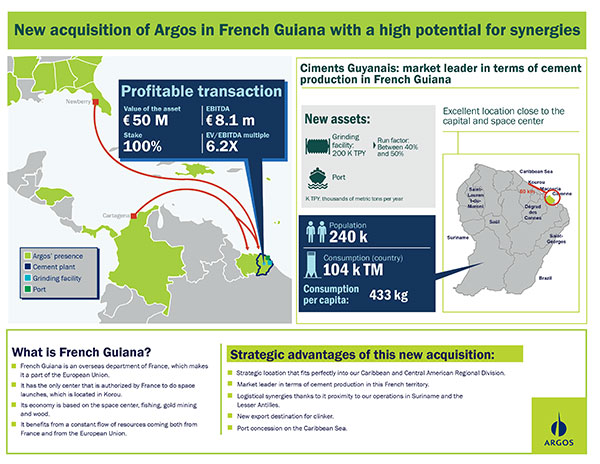 Ciments Guyanais is owned by Lafarge and Holcim, who hold equal stakes in the company. The assets generate an EBITDA of around €8.1 million pa, meaning that the operation has an Enterprise Value over EBITDA ratio of 6.2. As such, the purchased facilities have a high potential for Argos in terms of value creation.

“This new acquisition in French Guiana nicely complements our current network of assets in the region, especially given its proximity to our grinding facilities in Suriname and our cement terminals in the Antilles. This overseas department of France has a cement consumption per capita of 433 kilos per year, which is almost twice as much as the average in Latin America. Also, the assets are well aligned with the operations that were recently acquired in the United States and with the already existing ones in the Caribbean and Colombia,” said Jorge Mario Velásquez, CEO of Argos.

Read the article online at: https://www.worldcement.com/the-americas/09042014/argos_acquires_ciments_guyanais_from_lafarge_24/

Some key facts about cement and building materials producers Lafarge and Holcim following the announcement that they plan to merge.

Argos will gain an integrated cement plant and grinding unit, as well as associated port infrastructure, growing its presence in the Central American and Caribbean region.