A team of scientists from Lawrence Livermore, Harvard University and the University of Illinois at Urbana-Champaign have developed a new type of carbon capture media made of core-shell microcapsules. These consist of a highly permeable polymer shell and a fluid that reacts with and absorbs CO2. The capsules ensure that the fluid remains inside the core, allowing the CO2 to pass back and forth through the shell capsule. The fluid is a sodium carbonate solution, which is commonly known for being the main ingredient in baking soda. 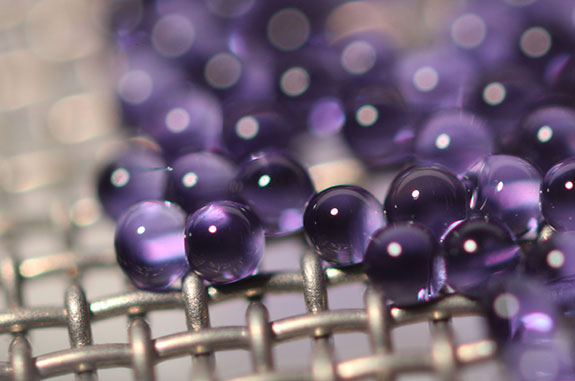 Microcapsules containing sodium carbonate solution are suspended on a mesh during carbon dioxide absorption testing. The mesh allows many capsules to be tested at one time while keeping them separated, exposing more of their surface area. (Photo by John Vericella/LLNL).

According to the team of researchers, the use of a sodium carbonate solution could provide environmental advantages over more caustic solutions, such as monoethanol amine. Unlike more caustic sorbents, the microcapsules will only react with the carbon dioxide. In addition, the sodium carbonate can be mined domestically and there are no issues regarding recycling or degradation.

“Our method is a huge improvement in terms of environmental impacts because we are able to use simple baking soda – present in every kitchen – as the active chemical,” says Roger Aines, one of the Lawrence Livermore team members. “Corrosiveness also is improved because the chemical is more benign and always is encapsulated. Putting the carbonate solution inside of the capsules allows it to be used for CO2 capture without making direct contact with the surface of equipment in the power plant, as well as being able to move it between absorption and release towers easily, even when it absorbs so much CO2 that it solidifies.”

“Encapsulation allows you to combine the advantages of solid capture media and liquid capture media in the same platform,” explains Jennifer Lewis of Harvard School of Engineering and Applied Sciences. With Aines adding: “It’s all about surface area. The capsules force the baking soda to stay in little tiny droplets (an order of magnitude smaller than a drop of amines would take on), and little drops react faster because they contact more of the CO2.”

This is the first time that a method using microcapsules has been applied to carbon capture and release. A new kind of carbon capture process will be required, and Livermore is working on this with the National Energy Technology Laboratory (NETL). The encapsulation process has been developed as one of the US Department of Energy’s inaugural Advanced Research Projects Agency-Energy carbon capture projects.

The process can be used within heavy industry, such as cement and steel, as well as in both coal and natural gas-fired power plants.

Read the article online at: https://www.worldcement.com/the-americas/09022015/researchers-develop-carbon-capture-media-comprised-of-microcapsules-300/

The US Department of Energy’s Illinois Basin-Decatur project successfully captured and stored 1 million t of carbon dioxide and injected it into a deep saline formation. 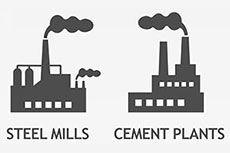