The Port of Long Beach in California, USA, has released a draft environmental impact report (EIR) regarding proposed modifications to the Mitsubishi Cement import facility at the port. Located on Pier F, the terminal receives cement from bulk cargo vessels, which is then stored in a warehouse and silos before being transported to concrete batch plants by truck. The cement company’s proposal includes additional storage with a capacity of up to 40 000 t and upgrading unloading equipment. In addition, a new air pollution control system would be installed at the terminal to reduce emissions from ship auxiliary generators at berth.

A public meeting will be held on 22 October at Long Beach City Hall to gather comments on the draft EIR, and written comments will be accepted up to 18 November. The report, along with further information regarding comments, can be found here.

Read the article online at: https://www.worldcement.com/the-americas/07102014/californian-port-releases-eir-for-mitsubishi-cement-terminal-modification-plans-623/ 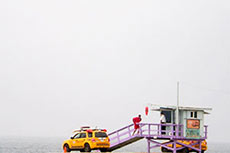 US and Puerto Rico: clinker production and shipments of Portland, blended and masonry cements all increased y/y in July 2014 according to the latest USGS report.

A report from the National Association of Manufacturers (NAM) calls for investment in infrastructure to maintain competitiveness with other nations.