Those were the words of Enrique A. Garcia, the President of Cemex’s operations in Puerto Rico, during the Recicl-Arte 2016 awards ceremony. Recicl-Arte, which literally means “recycled art”, is a design competition that for 5 editions has sought to raise awareness in Puerto Rico’s youth about environmental preservation. The concept is simple: every year, an invitation to create a model using recycled materials and compete for a US$5000 prize is extended to high school seniors.

"The competition was developed in 2012 with the aim to position Cemex as a leader in environmental preservation and awareness in Puerto Rico", says Marie Nydin Watlington, Cemex Legal and Public Affairs Manager in Puerto Rico. Since then, the initiative has been a resounding success, with a total US$49 000 awarded to 17 senior classes of different schools on the island. Though initially the program was open only to public schools, in its fifth edition the competition featured 37 teams from both public and private schools.

According to Watlington, Cemex chooses a different theme each year and, "The themes of the Recicl-Arte contest have continued to evolve with each passing year to help it become what it is today, a forum for the exchange of ideas where students present sustainable and ingenious solutions with the aspiration to reduce ecological footprints”. The theme that the students developed this year is "The City of the Future and Sustainable Construction. Urban Design and Mobility". Cemex, as a worldwide leader in facing the challenges of urban cities, contributed information to support the students in their design and development of each project.

Once Cemex certifies a school’s participation, the teams proceed to the 2-week, interactive phase of the contest, where the public votes for their favourite piece in the Recicl-Arte Cemex Facebook page. The top 10 projects with the most “Likes” become finalists. They then have the opportunity to personally present and explain their work to a panel of judges.

The students have to show how they implemented recycled materials and included Cemex elements in their model. Watlington recalls that in the early years of the contest, only the models were evaluated. "Last year was the first time that teams of finalists presented their projects live to the judges. It was the students themselves who insisted that they wanted that opportunity", she explained.

On the day of the 2016 awards ceremony and exhibition of models, the architect Pilarín Ferrer, President of the College of Architects and Landscape Architects of Puerto Rico, and one of the contest judges, movingly addressed all contestants reminding them of all they had accomplished. "You have to realize that you are, today, more educated and aware of what our country is, what our built heritage is, our nature, our landscape, and I hope that you take that message to your peers".

The President of Cemex’s operations in Puerto Rico said he was very proud of the students who participated. "The students showed their talent addressing a problem that is no longer a problem for the future. It's amazing how creative they are and I think we're in good hands".

Read the article online at: https://www.worldcement.com/the-americas/05072016/puerto-rico-youth-promote-cemex-city-future-458/ 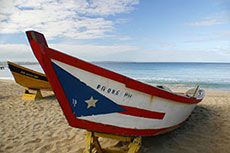 According to the Government Development Bank of Puerto Rico’s Economic Activity Index, 1.29 million bags of cement were sold in April 2014, down 17.5% y/y.