The Portland Cement Association announced a number of organisational changes in its D.C. Office.

As of 1 November, A. Todd Johnston was promoted to executive vice president of government affairs. Having joined the PCA team in January 2014, he will oversee all of the association’s government affairs operations, including activities at both federal and state levels. Collin Long has been promoted to senior director of current affairs. He has been with PCA for three years and will continue his work fostering relationships and representing industry interests.

On the 2 November, it was announced that Rachel Derby had joined the PCA’s Washington D.C. staff. She will serve as vice president of government affairs, focusing on legislative relationships and advocacy.

“We are very pleased to have Rachel join PCA,” said James G. Toscas, PCA president and CEO. "The addition of her considerable talent and experience is a significant step in the reorganisation of the association’s advocacy team, following the recent addition of Michael Schon as vice president and counsel in charge of regulatory issues. Our objective is to build a top-flight team in Washington to serve as the voice of the cement and concrete industry.”

Derby was previously the senior director of federal government affairs for the Toy Industry Association, where she managed outreach with the White House, Congress and other regulatory agencies. She also coordinated the organisation’s strategies on environmental sustainability, chemical regulations and social responsibility. Before working with TIA, she was director of government affairs with the National Association of Police Organisations. She received her bachelors degree in marketing from Florida State University.

Read the article online at: https://www.worldcement.com/the-americas/03112015/pca-personnel-changes-in-dc-office-902/

PCA, FLASH and III have formed a coalition to build a more resilient home for a family still struggling with the aftermath of Superstorm Sandy.

PCA and FLASH will rebuild a family home destroyed by Superstorm Sandy. 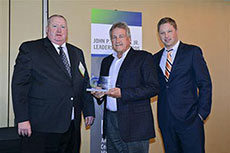