Towards the end of 2014, the IMF predicted that China would overtake the United States by the end of that year to become the world’s largest economy, five years earlier than expected. Others say it will be 2015, but no matter the timing, we know that it will be a reality. As the Chinese government begins to formulate the next Five-Year Plan covering 2016 – 2020, we look at recent developments in China, and in its neighbours, Taiwan, Japan and South Korea.

One in a billion

Jack Ma has come a long way since he was an informal tour guide in Hangzhou, China, in the late 1970s and then an English teacher at the Hangzhou Teacher’s Institute. Today, he is China’s richest man, with a net worth of almost US$22 billion. In September 2014, Alibaba, the giant online retailer that he started in 1999, went public on the New York Stock Exchange with a market value of US$230 billion. It is said that he started Alibaba with his wife and 16 other co-founders in his living room, which doubled as his company office. He called the company Alibaba to evoke the phrase ‘Open Sesame’. As Ma says: ‘the company’s platforms open a doorway to fortune for small businesses’.

His success has been achieved through opportunism and a passion to transform some big international ideas into bigger Chinese ones. In the 12 months to June 2014, Alibaba accounted for 54% of the country’s package deliveries and helped to create 15 million jobs. Fifty-one-year-old Ma, having achieved dominance in the internet business scene in China, is now moving into entertainment, finance and football. It is said he has a ‘burgeoning interest in environmentalism’. As John Stepek wrote in Prospect/The Week Guide, ‘If investors ever needed reminding that investing in China is a land of vast potential opportunities amid all the risks, this was it.’

At present there are certainly plenty of risks. Real estate investment, which affects more than 40 other sectors from cement to furniture, rose by about 12.5% in 2014 compared to 13.2% in the previous year. Wang Tao, an analyst at UBS in Hong Kong, says: ‘The weakest part of China’s recovery is still the property sector. The government has relaxed some controls and property sales may pick up, but we may not see improvement in sectors like heavy industries. We expect the economy to continue to slow down.’ In September 2014, the government relaxed some controls, such as cutting mortgage rates and down payment levels for some home buyers for the first time since the 2008/09 global crisis in a move to boost the economy, which was becoming threatened by a flagging housing market. At the time, analysts felt it was too early to see if the measures would halt price declines. In many Chinese cities developers have massive inventories of unsold homes, reports biznews.com.

It also mentions that in 2014, China’s largest cement manufacturer, Anhui Conch Cement Company, posted its slowest profit growth in a year and a half, pinched by the weakening property sector.

Towards the end of 2014, The Ministry of Industry and Information Technology announced that before the end of the year over 82 million t of obsolete cement production capacities would have been eliminated. This represented an increase of over 30 million t from the original target of 50 million t. The Chairman of Asia Cement (China), Hsu Shu-tong, sounded a cautious note in September 2014, stating that the growth rate of fixed assets investment had declined while the property market had remained depressed. The growth rate of cement demand had hit its lowest level in 10 years. A report on www.cementchina.net states that based on the relationship between the rate of urbanisation and per capita cement consumption, the relationship between GDP and cement demand, and the relationship between GDP growth and cement output growth, China’s cement industry could well hit a peak of consumption in about 10 years. It predicts that future demand for cement will remain at 4.9% per year. It is well known that since 2006, mergers and acquisitions (M&As) have become the core theme of the industry’s development. Private or large enterprises or groups that form JVs are the ones on the lookout for these. The report talks of ‘diversified ways of M&As. These include equity acquisition, asset acquisition, asset replacement, and debt restructuring. Cross-industry M&As will link upstream and downstream industries to form integrated companies.’

Last year, China’s State Council announced guidelines for the country’s next round of urbanisation for 2014 – 2020, which is targeted to rise from 53% in 2013 to 60% in 2020. Some 100 million rural residents are expected to move into urban areas and set off RMB10 trillion of investment in related municipal infrastructure. Roger Liu of China Finance Online comments that further integration of more developed city clusters in the East (Beijing-Tianjin-Hebel, Yangtze River Delta and the Pearl River Delta) and the expansion of new city clusters in Central and Western China should spur investment in cross-region transport and municipal infrastructure construction. Social housing remains a key area and the country aims to start construction of 7 million units and spend RMB1 trillion to redevelop shanty towns. The Ministry of Housing and Urban-Rural Development of China said in September 2014 that 4.7 million households were expected to have been built in 2014, compared with over 3.2 million rebuilt houses in shanty towns in 2013.

In November 2014 came the historic declaration from the Asia-Pacific Economic Corporation (APEC) Summit in Beijing, that China and the United States had agreed to new limits on carbon emissions.Together, the two countries produce approximately 45% of the world’s carbon emissions. President Barack Obama stated that the US had set a goal of reducing greenhouse emissions by 26 – 28% by 2025, compared to 2005 levels. President Xi Jinping said his country would cap its emissions by 2030. This is the first time that China has set a date for capping. At the same time the Chinese leader unveiled plans to ensure at least 20% of the country’s energy will come from alternative sources by 2030. As one reporter put it, ‘It is hoped that the historic deal will encourage others to sign up to similar targets ahead of the global summit on climate change in Paris in December of this year’.

More of the same

Taiwan Cement Corp. continues to expand its interests in mainland China. In November 2014 it announced plans to acquire Sichuan Railway Group Cement Co. for US$110.57 million via a subsidiary. The deal will see Taiwan Cement increase its annual cement capacity by 2 million t. Its current total annual production in China is 55.2 million t and in Taiwan it is 10.6 million t. This acquisition will make the company the largest cement company in the vicinity of Chongqing, Sichuan Province, with an annual capacity of about 8 million tpy. We mentioned in our article in the March 2014 issue that the company has set a target to raise its capacity in China to 100 million t by the end of 2016. This will be through further acquisitions and capacity expansion.

The company raised cement prices in Guangdong Province in August and October 2014 amid rising demand in the Pearl River Delta. It has indicated that prices might also increase in other provinces such as Guangxi, Jiangsu, Anhui, Fujian, Yunan, Sichuan and Guizhou.

We reported in June of last year that Taiwan’s second largest cement manufacturer, Asia Cement Corp., was on the lookout for new M&As in China. The production capacity of its Chinese unit is expected to rise to 40 million t in 2015 and up to 50 million t in 2016. This is based on the premise that investment in infrastructure and property will continue to grow through urbanisation in rural areas.

On 15 December at the 2014 Cross-Strait CEO Summit in Taipei, Jack Ma, (yes him again), urged Taiwan’s small businesses to sell their products to the mainland using Alibaba as a platform. He was addressing business leaders from China and Taiwan to tie in with an eight-day visit by a top Chinese envoy. Trade with China continues to be a sensitive topic as fears increase over the mainland’s influence on Taiwan.

Read the article online at: https://www.worldcement.com/special-reports/30012015/far-east-opportunities-and-risks-part-one/ 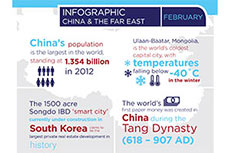 The regional report in World Cement’s February 2015 issue includes an infographic on China and the Far East.

China’s coal production fell by 2.1% y/y in the first 11 months of 2014, according to data from the China National Coal Association.

The nationwide ETS is said to be the second largest in the world and is a key component of the government’s aim to reduce emissions by 30% by 2020 against current levels.