The cement production process begins when chalk and clay are transported from South Ferriby’s quarry, approximately 2 km from the plant. The quarry contains reserves for around 60 years. An overland conveyer belt brings the material up from the quarry over the brow of a nearby hill and down into the plant, passing over the River Ancholme and the back of the village. The conveyer has a chalk and clay capacity of 500 tph. The force of the flooding caused the conveyer belt to twist and bend. The entire length of the belt had to be replaced, including a section running over the top of a local primary school. The ability to replace equipment in such close proximity to the local population demonstrates the excellent relationship that the company has forged with the community surrounding the plant. In the wake of the flooding many Cemex employees actually left the plant and were deployed to assist the community with recovery operations. It is this convivial attitude that served Cemex well in their own recovery push and allowed them to work alongside the local population.

The raw material from the quarry passes into South Ferriby Cement Plant alongside the compressor building and the structures housing parts of the electrical network. As the cement plant grew organically from installation, buildings such as those flanking the conveyer belt were constructed as and when they were required. The plant was therefore lacking slightly in coordination. However, the flood offered Cemex the chance to streamline their future. With the need for everything to be replaced, Cemex moved towards a ‘design premise’ for the new buildings. As a good example of how Cemex has cleverly restructured post-flood, the many compressors buildings around the site have been rationalised into a single base building with fewer compressors.

The electrical system houses have also been reorganised. As technology had progressed since the first construction of the plant, all new updated equipment had to be procured by Cemex with the installation of the new electrical buildings. The vast majority of the low voltage electrical systems were procured and constructed in the UK, the relatively small amount of high voltage systems were built by Siemens in Turkey and imported. Cemex felt it was essential to procure the most modern standard of equipment, particularly given the significance and power of the electrical rooms in question. The electrical buildings on site alone have enough energy passing through at any one point in time to power 4000 kettles. Together with the the construction of the main sub-stations, approximately 13 km of high voltage cables had to be restored around the site, including digging into the ground and excavating areas to avoid causing a potential hazard in the future. The devastation caused by the flood was felt perhaps most strongly in the electrical systems. However, Cemex have demonstrated through determination and hardwork that a recovery operation can be utilised as an opportunity to grow and learn.

Around 90 tph of raw material passes the compressor and electrical stations along the conveyer. Chalk and clay are moved from the quarry and combined with sand and oxide. The raw material is flash dried in two separate streams by hot gas generators. The retention time of the material passing through the flash drying process is in milliseconds. Along with the hot gas generators and the other main infrastructure, 1500 motors on site had to be checked and recommissioned after the flooding. The alignment of the kilns and the re-commissioning of mechanical screws that were flooded and had Bering damage also had to be considered. The furnaces were safe to use after the flooding but were checked nonetheless. Meal is created from the raw material through the process of drying and crushing.

This is part two of a three-part article written for World Cement’s Ports and Terminals Supplement and abridged for the website. Subscribers can read the full April issue by signing in, and can also catch up on-the-go via our new app for Apple and Android. Non-subscribers can access a preview of the April 2016 issue here.

Read the article online at: https://www.worldcement.com/special-reports/28032016/rising-deep-cemex-part-two/ 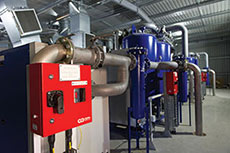