The Swedish construction industry is continuing to expand, and cement has, for a long time, played an integral part in the country’s infrastructure. In 1871, the first cement plant was opened in Sweden in Lomma, Limhamn, just outside the city of Malmö, by Skånska Cement Ltd.

Malmö is a key hub for cement distribution for Cementa, a HeidelbergCement Group, in Sweden. Cementa’s Malmö terminal facility at the Copenhagen Malmö Port is ideally placed for easy distribution, with access to shipments, available railway lines and a continually growing road infrastructure.

Cementa offers a range of different types of cement, 4 – 5 grades. The company has three cement plants across Sweden.

Firstly, Cementa’s Skövde plant, located in Västergötland, southwest Sweden, produces construction and rapid-hardening cement. The facility has four kilns with a capacity of approximately 600 000 tpy. Its main distribution area is the interior of Western Sweden.

The second plant is the Degerhamn plant, located on the Baltic Sea Island of Öland. It is one of the first cement plants in Sweden and has a capacity of 250 000 tpy of cement. It focuses on manufacturing cement used in heavy constructions. One of the largest projects this cement was used in was the Öresund Link Bridge between Sweden and Denmark.

Third is Cementa’s Slite plant, located in Gotland. In 1919, this plant started up the first rotary cement kiln and production has continued uninterrupted since. The plant produces more than 75% of Swedish cement production, producing approximately 2 million tpy of cement. It focuses on construction cement, rapid-hardening cement and different types of cement for export.

The Malmö terminal is home to Cementa’s 35 000 t capacity multi-compartment silo (Figure 2). The silo was designed and constructed by IBAU HAMBURG and opened in 2012. Requiring 8200 m3 of concrete, 1300 t of prefabricated concrete elements, 1600 t steel reinforcements, 700 t structural steel, 450 t mechanical equipment and 56 000 m electrical cables, it was a large EPC project. Sub-suppliers were contracted for the structural engineering and static calculations of the silo; Brückner Grundbau for the piling and foundation works; DIWYDAG for the concrete works; SGS for the structural steelwork and equipment erection, and Haver & Boecker for the electrical works and automation.

The silo’s structure alone (concrete and machinery) weighs 70 000 t and with cement it is 105 000 t. It is covered by large white surface sheets and has a blue glass façade at the top of the tower that illuminates at night.

The multi-compartment silo has an IBAU HAMBURG central cone design with an outer diameter of 26 m and a height of 90 m. It consists of six chambers, which allows it to achieve significant flexibility in the storage of different types of cement .

One of the six compartments is an inner compartment, which has a 15.75 m dia. and a 10 000 t capacity. This inner silo has a central cone design and six outlets with six aeration sections, each with a left and right subsection. Aerzen Rotary piston blowers produce compressed air for silo aeration.

The other five chambers make up the outer ring and each have approximately 5000 t of storage capacity. Each of these compartments has an identical extraction system: two aeration sections with a right and left hand subsection, with tangential IBAU fluidslides that convey the stored material through radial fluidslides to the compartment outlet.

A flow-control gate ensures that material extraction from the compartments is always fully controlled. From these gates, the material stream is separated to the necessary loading lanes.

The bottom of the silo is equipped with sloped open-type fluidslides, which are enclosed with air-permeable fabric. In order to fluidise the cement above the fabric and direct the material flow to the compartment outlets, aeration air is injected under the fabric. Aerzen supplied the air pump for fluidisation inside the silo.

Cement can be moved between chambers. For example, if a chamber has to be emptied for changing the cement grade or for cleaning the chamber, these works can be carried out without affecting the other chambers. There are also different pressure values, moving from high pressure to low pressure as the cement moves down, creating an even reduction of cement so nothing is left in the silo to cause buildup at the sides.

This is part one of a two-part article written for World Cement’s Ports and Terminals Supplement and abridged for the website. Subscribers can read the full April issue by signing in, and can also catch up on-the-go via our new app for Apple and Android. Non-subscribers can access a preview of the April 2016 issue here.

Read the article online at: https://www.worldcement.com/special-reports/28032016/port-visit-cementa-part-one/

Timetric’s CIC has found that the Swedish construction industry is set to expand to value US$68.3 billion. 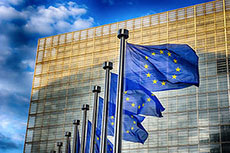 Cemex has announced that, after working closely with the European Commission, antitrust proceedings have come to an end.

The following lists highlights from the 2Q14 report presented by Cembureau, the European cement association.