When a vehicle catches fire in a tunnel, as happened following an accident in 2003 in the Gotthard tunnel in Switzerland, the temperature rises abruptly and drastically. The ensuing smoke is an immediate danger, meaning that people must be evacuated as quickly as possible.

Not quite as imminent, but nonetheless devastating, is the effect the fire has on the tunnel structure itself. The heat produced by the fire vaporises water in the concrete. The ensuing pressure is initially released into the pores of the concrete. But as the pressure continues to rise, small pieces of concrete blast off like popcorn in a process called explosive spalling. The thickness of the concrete is reduced, and likewise its load-bearing capacity. A real danger of the tunnel collapsing arises, putting later reconstruction work at risk.

Since 2012 fire protection certification is required for all new street tunnels in Germany. One possibility for ensuring fire protection is to add polypropylene (PP) fibres to the concrete. "Once a temperature of 110°C is reached, the fibers in the concrete start to melt away," explains Prof. Christian Große at the Chair of Non-destructive Testing (ZpF) at TUM. In the process, small pockets are created in the concrete into which the pressure can escape.

Yet, how exactly synthetic fibres alter the behaviour of concrete remained unclear. Now the TUM scientists, in collaboration with the Institute of Construction Materials at Universität Stuttgart and the MFPA Leipzig GmbH, have developed a methodology to peer inside the concrete.

The researchers placed concrete slabs on top of an open test kiln, like a lid on a pot. They installed acoustic sensors on the top sides of the slabs. The concrete was then heated from below to 1300°C. 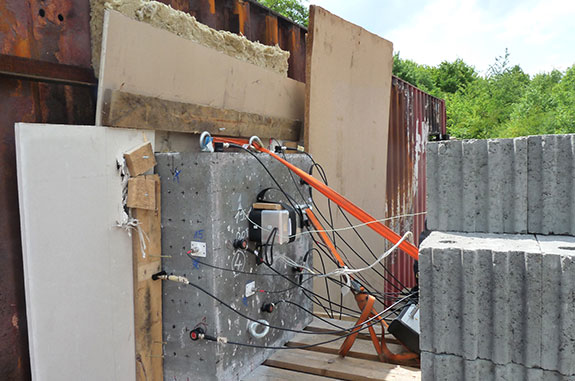 A concrete slab that was fitted with acoustic emission sensors. Copyright TUM

"When concrete is damaged, cracking sounds are produced," explains Roland Richter, doctoral candidate at the ZpF. The acoustic waves travel through the material and can be measured at the surface. Since multiple sensors are attached to the concrete, the precise source of the sounds can be determined, not unlike the manner in which earthquakes are monitored using seismographs.

For the first time ever, the engineers were able to observe the temporal progression of damage during a simulated tunnel fire. The concrete slabs without PP fibres produced ten times more acoustic events than the slabs with PP fibres.

The scientists hope to further refine and validate their measurement method. The technique could prove useful in comparing – and thus optimising – different concrete mix designs with regard to their behaviour in fire.

The research was carried out in the context of the German Research Foundation (DFG) project "Explosive spalling of concrete in fire" (project partner: Institute of Construction Materials at Universität Stuttgart), as well as an AiF project funded by the German Federal Ministry of Economics and Technology in collaboration with the MFPA Leipzig GmbH.

Read the article online at: https://www.worldcement.com/special-reports/23022015/tunnel-fires-preventing-explosive-spalling-of-concrete-386/