The use of pozzolanic and/or latent hydraulic cement constituents instead of Portland cement clinker represents a key leverage factor for the environmentally important reduction of CO2 emissions within the cement industry. In view of the predicted significant increase in demand for cement and the necessity of further reducing the clinker factor, calcined clays are becoming more important for the cement industry as a pozzolanic main constituent in cement.

The use of calcined clays as a main constituent in cement in accordance with EN 197-1 is possible if the content of the reactive silicon dioxide is at least 25 mass %. Although suitable raw material resources exist in Europe and some cement manufacturers have access to these, calcined clays have rarely been used in cement manufacture up to now, mainly due to a lack of research work in this field. In particular, the influence of the chemical and mineralogical composition of the clays on their suitability as a main constituent in cement has not yet been sufficiently investigated.

Fifteen different mined clays from clay deposits, which could be assigned to the four groups “kaolinitic clays”, “bentonitic clays”, “kaolinitic-illitic clays” and “chloritic clays” were investigated concerning their suitability as a cement main constituent.

The determination of the optimum burning conditions is an important step to generate a sufficient pozzolanic reactivity of the clays. Therefore, between 2 and 9 calcination steps were carried out per clay, varying in burning temperature (500 – 1300 °C) and duration (5 or 30 minutes). After fixing suitable burning conditions for each clay, larger amounts of calcined clays were produced accordingly. Figure 1 shows exemplarily the X-ray diffractograms of the calcined samples of kaolinitic-illitic clay in comparison to the starting sample. It is recognisable that after calcination at 1000 °C all clay minerals (illite/muscovite, kaolinite and montmorillonite) were converted to amorphous reactive phases. New, less reactive high temperature phases were sillimanite and/or mullite, and hematite from as low as 900 °C. 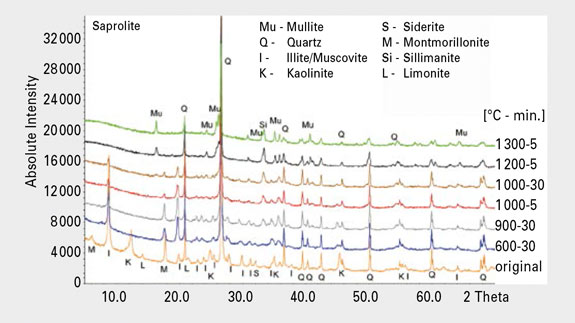 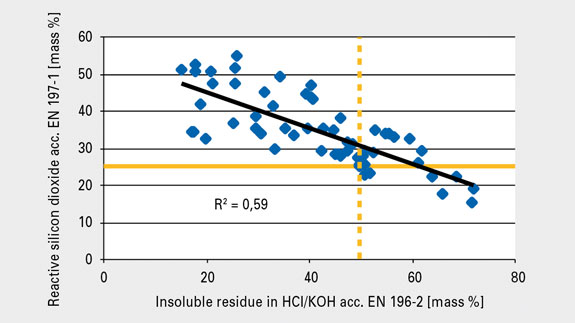 Figure 2. Reactive silicon dioxide acc. EN 197-1 of the calcined clays depending on their insoluble residue in HCl/KOH acc. EN 196-2.

CEM II/A-Q with 20 mass % and CEM IV/B (Q) with 40 mass % of the respective clay components were produced by intensively mixing the calcined clays with a CEM I 42.5 R. Additionally, cements with an industrial metakaolin as reference were manufactured the same way.

Aspects regarding the optimisation of strength development and the durability of cements with calcined clays are currently being investigated in several research institutes.

This article was originally published in Newsletter 3/2014 of the European Cement Research Academy and is reproduced by kind permission of ECRA.

Read the article online at: https://www.worldcement.com/special-reports/17092014/the-use-of-natural-calcined-clays-as-a-main-constituent-in-cement-496-/