Worldwide consumption of sand equates to around 40 billion t annually and, accounting for an estimated 30 billion t of this, construction has by far the biggest ‘sand footprint’. Applications include land reclamation and building road embankments, but perhaps most significantly fine aggregates such as sand are also an essential component of concrete and asphalt. A single kilometer of highway, for example, requires 30 000 t of sand. Making up around 35% of the volume of concrete, sand fills voids and provides strength to produce a truly solid and reliable building material.

No sand in the desert

The vast quantities of sand found in the many deserts of the world give rise to the misleading notion that sand is an almost unlimited natural resource. In fact, the properties of the sand used in concrete can have dramatic impacts on its quality. The wind erosion of sand in the desert results in smooth, rounded grains, which do not bind well. Moreover desert sand is mono-grained, meaning of similar size. This makes it unsuitable for use in concrete, which requires small, intermediate, and coarser particles to prevent voids between grains and reduce the amount of water necessary. Instead, then, sand for construction has traditionally been mined from land quarries and riverbeds.

With an expanding global population fuelling the need for housing and infrastructure, however, natural sand is being extracted at an increasing rate. A decline in available resources has caused the expansion of mining to coastal areas and dredging of the seafloor. This large-scale extraction is in turn having an impact on marine and river biodiversity, causing coastal and inland erosion, increasing the chance of flooding, and lowering the water table in some areas, exacerbating the risk of drought. In many environmentally sensitive areas, legislation has therefore been put in place to prevent sand extraction.

As a result of the increasing scarcity of natural sand, prices are being pushed up. This makes sand a profitable business in many markets. Illegal activity is increasingly common, with the erosion of entire areas of shoreline occurring as a result of sand thieves in places such as Cape Verde or Morocco, and reports of an organised sand mafia in India. To combat this, in some areas of India the mining and use of natural sand has been banned. This has led to a reduction in the production of concrete and thus directly impacted Holcim’s cement sales in the region.

Part of the solution

To address the issue of sand scarcity, Holcim is exploring the potential of manufactured sand - or ‘M-sand’ - for use in concrete. M-sand is a term used to describe fine aggregates produced by crushing stone using specialised equipment, or generated as a byproduct of the production of coarse aggregates. However, such crushed sands can negatively impact concrete performance due to variations in their physical properties. These variations can stem from a number of factors, ranging from the nature of quarry deposits to issues with extraction, processing, and application methods.

Despite these challenges, Holcim is finding ways to increase the use of manufactured sand in concrete through its M-sand Initiative. To support operations across the Group, the initiative has developed a methodology for assessing the quality of M-sand. This assessment is based on using standard and application-oriented product testing tools to examine certain sand quality parameters that are important in application; particle grain shape, clay contamination, and issues with gradation can all significantly impact concrete workability – and can now all be more easily analysed.

Moussa Baalbaki is Head of Advanced Concrete at Holcim Technology and, alongside Senior Consultant Manuel Eggimann, has been instrumental in driving the M-sand initiative forward. According to him, such tools are essential in tackling the issue of sand scarcity, particularly in bag market segments; "The chemical admixtures and mix design know-how used to compensate for poor sand quality in ready-mix concrete are not available in the bag market. Masons can face problems in producing satisfactory concrete performance and sometimes fail. And this can lead to decreasing cement sales." As a result the M-sand tools have been implemented across most of the Holcim Group companies in South East Asia, allowing technical customer support teams to demonstrate that issues with concrete performance are often linked to the use of inferior sand – as opposed to inferior cement!

Work on increasing the quality of manufactured sand is also ongoing, such as reducing harmful clay content through selective mining or mechanical removal during the production process. “In future, variations in the quality and consistency of the sand or substitute materials used in concrete production will likely require increasingly complex mix designs to ensure concrete performance is not affected,” adds Eggimann. To this end, Holcim Technology (HTEC) Innovation is also working on improving the performance of concrete containing lower grade or alternative sand through techniques such as better concrete packing or admixture optimization.

Given that the global population is projected to reach over 9 billion by 2050 and construction activity is expected to grow accordingly, the long term trend of sand scarcity – and the significant and diverse challenges it generates – is an issue to which the construction materials industry needs to respond. By taking action now to address this growing global challenge, Holcim is positioning itself as part of the solution and laying the foundations for a more sustainable future.

Read the article online at: https://www.worldcement.com/special-reports/16062015/footprints-in-the-sand-829/

Lafarge and Holcim have successfully secured support from Holcim shareholders for their proposed merger. 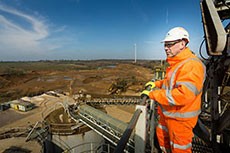 The former Sibelco plant in Leighton Buzzard has been acquired by Aggregate Industries.

According to the USGS, domestic production of construction materials was down 18% q/q in 4Q14, while gypsum production increased by 3% q/q.

The Confederation of Real Estate Developers’ Associations of India has urged the government to bring down the prices of cement and sand in Andhra Pradesh.