Martin Engineering is the sole distributor of the CleanScrape Cleaner, having taken responsibility for sales in Europe, Russia, North Africa and the Middle East. Unlike conventional belt cleaners that are mounted at a 90° angle to the belt, the CleanScrape Cleaner is installed diagonally across the discharge pulley, forming a three-dimensional curve beneath the discharge area that conforms to the pulley’s shape. The unique design incorporates a matrix of tungsten carbide scrapers and is tensioned lightly against the belt to prevent damage to the belt or splices. Despite extremely low contact pressure between belt and cleaner, it has been shown to remove as much as 95% of potential carryback material. The novel approach has been so effective that in many operations, previously crucial secondary belt cleaners have become unnecessary, saving further on belt cleaning costs and maintenance time. It has been proving itself in a wide range of applications, such as mining, coal handling, quarrying, cement, scrap and other material bulk handling operations.

The cleaner protects the belt with its specific application of low force and is ideally suited for both slow and fast conveyor belts, including those with mechanical splices. With its compact size, the design is an excellent solution for areas with restricted space. It can be located either inside or outside of the transfer chute, and the straightforward installation typically requires less than two hours. 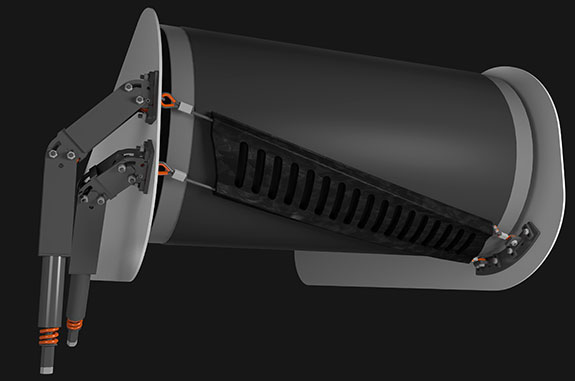 CleanScrape Cleaners are generally sold in three sizes: S, M, and L, which cover drum diameters from 270 mm to 1250 mm (10.6 in. to 49.2 in.) and belt widths from 300 mm to 2800 mm (11.8 in. to 110.2 in.). Each size is available in four different carbide metal grades to suit specific materials and belt structures, one of which is a carbide formulation developed for use on mechanically spliced belts. The supporting components of the assembly can be specified in regular steel or in stainless for specialised applications.

All of the CleanScrape Cleaner designs are certified by ATEX and can be used in underground mining. In addition to the pre-assembled belt cleaners that are ready for installation, the units can also be supplied in coiled lengths of 12.4 m (40.68 ft.), allowing users to cut to length as needed. Necessary equipment and accessories, such as chains or steel cables, can also be obtained from Martin Engineering by the metre.

CleanScrape GmbH was founded in 2014 to supply and further develop conveyor belt cleaning technology. The business emerged from the company IBS Industriemaschinen-Bergbau-Service GmbH, which has been active for more than 30 years in mining, tunnel construction and conveyor technology. IBS and CleanScrape are a part of Schmittgruppe, a fourth-generation, family-run business with headquarters in the northern Bavarian town of Bischofsheim an der Rhön.

“Both companies saw the value in collaboration, partly because of the technology, but also because of the similar company cultures,” said Michael Hengl, Managing Director for Martin Engineering Europe. “Our business models are based on comparable values, innovative solutions and quick internal decision-making. The CleanScrape Cleaner represents an entirely new dimension in belt cleaning, and we’re so confident in its performance that we provide a money-back satisfaction guarantee.” 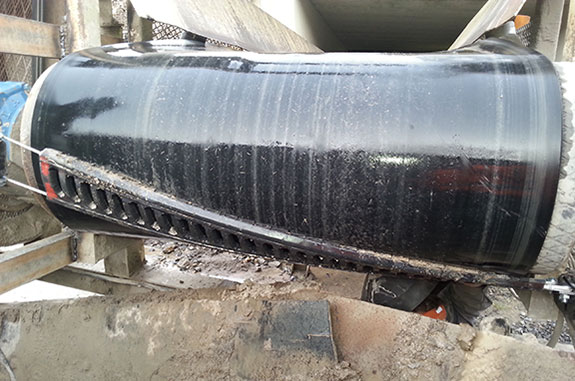 CleanScrape forms a three-dimensional curve beneath the discharge area that conforms to the pulley’s shape.

Read the article online at: https://www.worldcement.com/product-news/17062015/martin-engineering-sole-distributor-of-cleanscrape-cleaner-28/