For the Tier 4/Stage IV Final version of the DA40 ADT being tested with a new tracking and management system to be launched by Doosan, the truck has delivered an average fuel consumption figure of 17 l/hour, one of the best seen for a 40 t ADT.  This is an improvement on the already strong figures for the T4i DA40 machines in operation around the world, which are claimed to have outperformed other machines on the market by up to 15% and in some cases, have carried up to 10% more load.

Ewen Gilchrist, Sales & Marketing Director for the Doosan ADT range, said: “The outstanding fuel efficiency of the Doosan ADT range is down to a combination of features including the new Scania SCR diesel engines and the new ZF transmissions improving the transfer of power from the engine to the wheels for outstanding traction.

“When combined with an enhanced rear differential system which reduces engine rpm and further increases machine durability, customers are ensured an improved cost per tonne with the Doosan ADT range.”

The Doosan DA40 ADT combines ‘best-in-class’ fuel consumption with a top speed of 58 km/h (36 mph). The DA40 also has an increased body capacity of 24.4 m³, and the payload has been boosted to 40 t without tailgate, an increase of more than 15% over the payload of the previous MT41 model from Doosan. The higher speeds and payloads also contribute to reduced cost per tonne rates, allowing customers to increase profits from their mining, quarrying or earthmoving operations.

Ewen Gilchrist added: “As commonly requested by ADT users, we will be supporting the high machine performance with a new tracking system specifically for our ADT range, that provides full information on payloads, fuel consumption and cycle times. In addition, we recognise that fuel efficiency is very much dependent on the skill and experience of the operators. It is for this reason that Doosan has a team of trained demonstrators available to visit customers’ sites in Europe to train up drivers in the most fuel efficient way to operate units.”

Backed by over 40 years of expertise in the ADT market, the Doosan range utilises quality components from other world-class suppliers such as NAF, Parker and Rexroth, which like those from Scania and ZF, are all optimised for extreme off-road performance.

All Doosan ADTs feature an articulation hinge positioned behind the turning ring to provide equal weight distribution to the front axle even during maximum steer articulation. This, together with a free-swinging rear tandem bogie ensures equal distribution of weight to each wheel and guarantees permanent 6-wheel contact and drive for equal power distribution and excellent performance on difficult terrain.

The combination of the forward turning point, the unique tandem bogie and the sloping rear frame results in ‘best in class’ rough and soft terrain capabilities and avoids the need for electronic aids such as traction control.

Read the article online at: https://www.worldcement.com/product-news/16052014/doosan_articulated_dump_trucks_increase_fuel_efficiency_43/

Edge Innovate has launched a new RTU2200 high capacity radial truck unloader, which has been developed with feedback from dealers and end users. 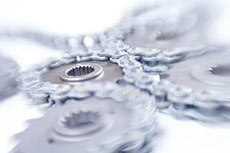 Haver & Boecker introduces its ‘Time to Chain’ philosophy, demonstrating how the innovative machine technologies of different brands can be linked together to form complete systems.