At 100 in. (254 cm) in diameter, Kason's model ‘K100-2(IRC)-SS’ is the world's largest Round Vibratory Screener, according to Henry Alamzad, company president. With a screening area in excess of 75 ft2 (7 m2), it can separate oversize particles from bulk material at rates of up to 150 tph. 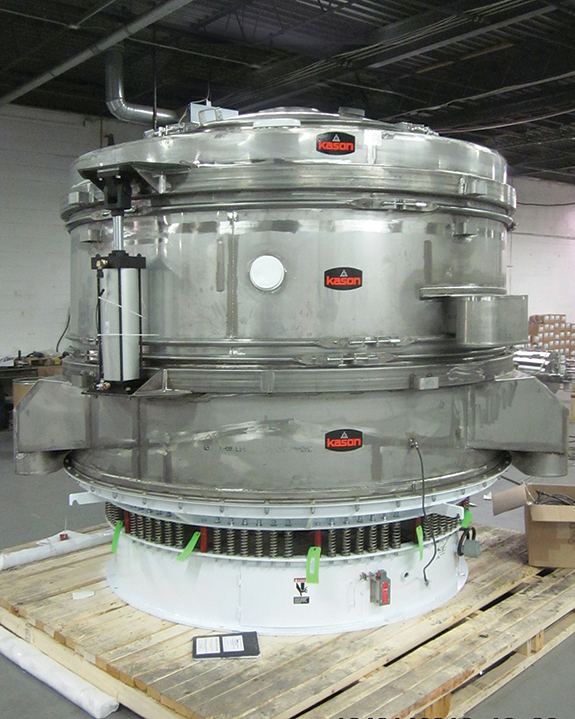 Kason's 100 in. (254 cm) diameter Round Vibratory Screener with Kascade™ Internal Recycle Screening Deck separates oversize particles from bulk material at rates of up to 150 tph.

Other features include an Air-Lift  quick screen change that allows rapid access to the interior of the unit for inspection, cleaning or screen changes, and an Auto-Lube automatic lubrication system that pressure-feeds food-grade lubricant to the gyratory motor bearings, extending bearing life by flushing out any dead spots where lubricant might pool, and allowing 6 – 12 months between reservoir replacements.

Offered in gravity-fed and in-line pneumatic models for batch or continuous operation, and available to industrial or sanitary standards, the separator is suitable for scalping of bulk food products such as sugar, salt, flour, or starch, as well as non-foods such as plastic pellets/compounds, fertiliser, PTA powder, metal powders, and foundry or “frac” sand.

The company manufactures a broad range of other circular vibratory screeners, as well as centrifugal screeners, and circular fluid bed dryers, coolers and moisturisers.

Read the article online at: https://www.worldcement.com/product-news/12082014/kason-launches-new-circular-vibratory-screener-79/

US construction spending in June was down 1.8% on May, while UK construction output increased by 1.2% m/m in June 2014 according to ONS estimates.

The construction aggregates company has issued a statement on its results, showing a 10% increase in shipments and a 32% rise in gross profit.