The DX340LC-5 and DX380LC-5 are factory-installed with the new CoreTMS state-of-the-art wireless fleet monitoring system, a feature not previously available as standard on Doosan excavators and now incorporated in all new LC-5 generation machines above 14 t. 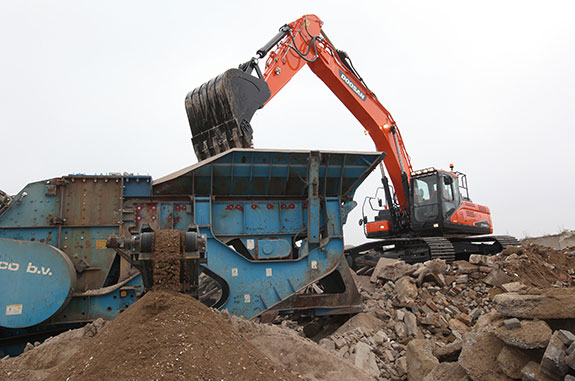 The new CoreTMS system is a tool designed specifically for the Doosan range, providing comprehensive information about machine performance in a dual mode (satellite, GSM). Because the software in the CoreTMS system has been upgraded to communicate directly with the EPOS system on a Doosan excavator, it is the only tool of its type capable of providing this level of information, delivering insightful and cost-saving data about equipment to help customers work more effectively. Also available for retro-fitting in a kit form, the CoreTMS system is supplied with a free 3-year subscription in new LC-5 excavators and customers are provided with their own account so that they can manage the machines in their fleet using the system.

Already excelling in spaciousness and ergonomics, the new cab in the DX340LC-5 and DX380LC-5 has been further refined for outstanding operator comfort and ease of operation. The cab offers super controllability with a new system that enables attachments to be operated from either the joystick or a two-way pedal. Users also have the unique jog shuttle switch, which remains a feature exclusive to Doosan excavators worldwide.

Control is available from either the pedal or the joystick and the selection is made via the control panel menu. For additional convenience, the controls for the auxiliary lines on joysticks have been repositioned, with the rotation and shear rollers positioned for left/right movement. The joysticks have also been shortened to reduce the effort required to operate them and an additional pedal for straight travel has now been installed on the left of the main travel pedals, a very useful feature when travelling straight over longer distances. 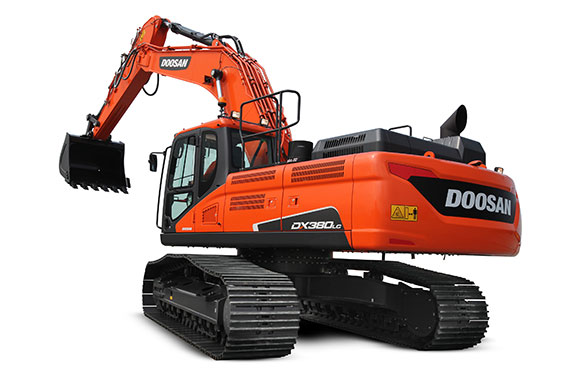 New gauges, functions and menus have been added to the control panel, including a new AdBlue® gauge. A new quick menu bar has been installed which allows key functions to be accessed quickly, without having to go through all the menus and validations.

A side-view camera is available as an option and the control panel allows the views from both the rear and side view cameras to be combined on the same screen, simply by pressing a button on the control panel. For more safety when using the cameras, a menu bar now stays open so that the operator can keep an eye out for warning symbols and the levels of key gauges.

To further maximise durability and reduce noise, all models are equipped with EM (Enhanced Macro-surface) bushings, which are also much more effective than regular bushings when greased.

Air pre-cleaners are fitted as standard, to blow much of the dust, dirt, insects, rain and snow out of the air intake, to ensure cleaner air is sent to the engine air filter. This extends air cleaner servicing intervals, enhancing uptime and productivity. Doosan has also added protection to the inner cab air filter and redesigned the cab air-conditioning filters for easier replacement.

Recommended for dusty environments (such as quarry and mining applications), the oil bath (9.5 l) pre-cleaner is available as an option to remove dust from the air intake, extending air cleaner servicing intervals.

To avoid permanent engine damage, an acoustic alarm has been added to call the operator’s attention to ‘water in fuel’. If the operator ignores the signal after several alerts, the engine and pump are automatically derated. In addition, to make it easier for operators to understand the importance of warnings and to communicate the proper warning codes, pop-up menus appear with detailed information with easier to identify warnings.

The Engine Emergency Stop Switch has been relocated on the side of the seat so that it is directly accessible from ground level, for faster access in case of emergency.

A new comfortable grip has been fitted to make opening and closing the door easier. Star-shaped anti-slip plates ensure that the steps stay much cleaner and more effective and to meet new EU regulations, safety bars are standard on all models.

All current options including narrow tracks, short and long arms, shoes and hydraulic lines are available on the DX340LC-5 and DX380LC-5. The DX340LC-5 also features the articulated boom.

Read the article online at: https://www.worldcement.com/product-news/09012015/doosan-launches-new-stage-iv-compliant-excavators-part-2-144/