Featuring a distinctive new machine styling scheme, the ‘LC-5’ range improves the already high standards set by the previous LC-3 range, adding to enhanced comfort and controllability with new features to boost fuel efficiency, uptime and return on investment, with a focus on increased power, robustness and agility. 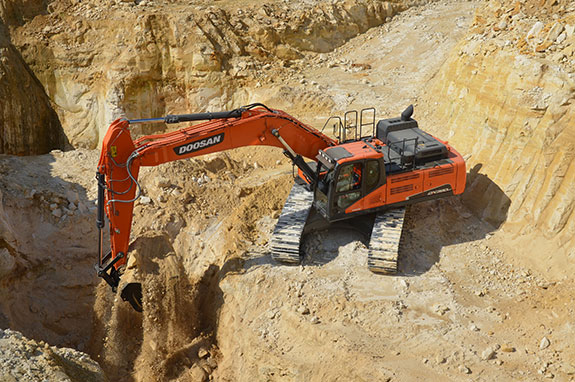 Increase in power and torque

The new DX340LC-5 and DX380LC-5 are powered by the Scania DC9 5-cylinder diesel engine, with an output of 237 kW of power at 1800 rpm, providing a 13 and 11% increase in engine power, respectively, and a 4% boost in torque over the LC-3 models. The engine meets Stage IV emission regulations without the need of a diesel particulate filter (DPF), through the use of cooled exhaust gas recirculation (EGR) and selective catalyst reduction (SCR) after-treatment technologies.

To help meet Stage IV regulations, Doosan has added a mass airflow sensor and exhaust brake to the engines. The mass airflow sensor allows the electronic control unit to improve the management of airflow provided by the variable geometry turbocharger and to optimise fuel delivery to the combustion chamber based on air intake volume and rpm.

Among the exclusive features of the Scania engines are the dual fuel filter and water separator systems. In the first, a full-flow paper fuel filter is used to remove large particles with a centrifugal cleaner filtering out small particles, providing operating economy and lower environmental impact. The water separator utilises a 10 µm sized primary filter connected directly to the fuel tank, and a 3 µm sized pressure-type secondary filter. The filters are equipped with a heating function as standard for better cold crank performance.

As well as the Scania engines, new innovative and exclusive features have been introduced that lead to significant reductions in fuel consumption amounting to an average of 6% compared to the Stage IIIB machines.

Among these features is the new ‘Trip Meter Setting’ screen which allows operators to check fuel consumption daily (or over a desired period) directly from the control panel; the new Auto Shut-Off provides an automatic shut down for the engine after a pre-set time when the machine has been idling for a specified time (3 to 60 minutes configurable by the operator); and to save even more fuel, there is a special Doosan-developed system, Smart Power Control (SPC), to optimise the balance between the pumps’ output and the diesel engine.

Developed entirely by Doosan, SPC is standard on all LC-5 models. SPC monitors both engine and pump power and limits unnecessary outputs depending on whether the work is light or heavy. The SPC can be used with all four work modes (E, S, P, P+).

Both the DX340LC-5 and DX380LC-5 feature the innovative Ecopower hydraulic system, which consists of a closed-centre main control valve (MCV) and a pressure-controlled pump. The system functions through the EPOS controller, which receives joystick and pedal signals via pressure sensors and main pump flow rate through swivel angle sensors. According to the operator’s inputs, the EPOS controller outputs the requirements to the EPPRVs (Electro-Proportional Pressure Reducing Valve) for the pumps to generate the required flow. 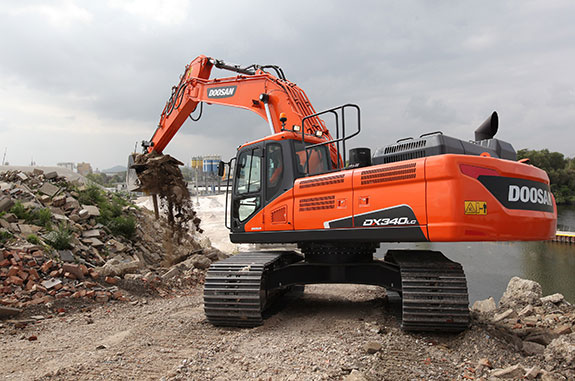 This new electric control of the pump power, combined with the closed-centre MCV, uses the engine’s power more effectively – maximising pump usage and reducing loss of flow and pressure – which results in more powerful performance in combined movements, as well as more comfort, smoothness and accuracy.

As a result, the DX340LC-5 and DX380LC-5 have two pumps as standard, allowing attachments to use both pumps for increased flow. The second pump always works at full flow. This system is necessary for certain applications (e.g. demolition) to supply the power required to operate attachments such as crushers and shears.

The excavators have a pre-heater with glow plug installed on the engine, which is a cold-start aid device for the winter season. The pre-heater is activated automatically when the start key is in the ON position in the ignition and the coolant temperature is -10°C or lower. The system guarantees proper starting down to -20°C.

The turbo charger is now better protected, and a step has been added on top of the engine to allow extra access for maintenance. The storage box is slightly larger for better storage from ground access, and the fuel pump has been relocated to the storage box for more convenience.

The batteries have been relocated inside the left radiator compartments (previously in the tool box) for easier access to the battery disconnection switch. The excavators are equipped with a battery capacity of 2*100 AH (1300 cca), which provides strong cranking performance in cold environments. In the battery box, a rubber cushion keeps the battery from moving, and a main circuit breaker will automatically cut off power in the case of shorting or overloading. The alternator has a higher capacity of 100 A as standard. This high capacity is ready for plug-in of various electrical devices and additional lamps.

Read the article online at: https://www.worldcement.com/product-news/09012015/doosan-launches-new-stage-iv-compliant-excavators-part-1-143/