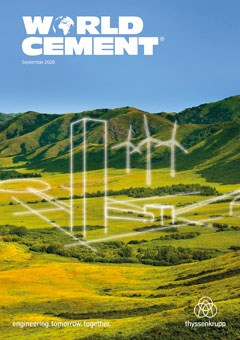 This issue’s Regional Report was provided by CW Group and focuses on the United States. In their report, CW Group analysts provide a detailed overview of the current state of the US cement sector and the impact of the COVID-19 pandemic (p. 10). One of the areas highlighted by the report is a US$1.5 trillion infrastructure bill that was passed by the U.S. House of Representatives in early July.

It goes without saying that an influx of cash even on the comparatively ‘small’ scale proposed by the Moving Forward Act would be hugely beneficial for the construction and cement sectors, both of which have suffered due to reduced demand caused by the pandemic. However, with the US General Election looming just a couple of months away, it appears that the bill will not be approved by the Senate.

This is unfortunate, not only because the cement sector will miss out, but because large-scale infrastructure projects can be useful tools in limiting the impacts of economic hardship. They employ large numbers of people, generate demand in related industries, and (if all goes to plan) result in improved infrastructure which will, in turn, promote further economic growth. The vast construction projects of FDR’s ‘New Deal’ are perhaps the most famous examples of infrastructure being used in this way, with many projects, such as the Hoover Dam, still in use today.

Forbes recently reported that over 700 cities across the US are now planning to delay or cancel infrastructure projects because of pandemic-related budget cuts.2 This forms part of a vicious circle that will, according to the National League of Cities, “not only stifle job growth and slow local economic activity, but further jeopardise economic recovery efforts in communities across the nation.”3 With a looming election, and economic difficulty ahead, there’s a chance we’ll see infrastructure become a key issue once more.