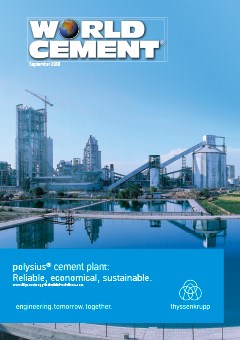 It appears international cement associations are something like the proverbial London bus: you wait an age for one to arrive and then two turn up at once. Over the last year or so, first the World Cement Association (WCA: which – despite the name – is unconnected with this magazine) and then the Global Cement and Concrete Association (GCCA) have been launched.

What has prompted this rush to represent the industry at an international level? Although I speak often of the cement industry, it is still perhaps more accurate to speak of cement industries in the plural: cement markets in general remain regional – both in terms of production (only a small fraction of clinker and cement production is traded internationally) but also in terms of regulation, cost pressures, etc. Despite the presence of some major multinational companies, global production remains relatively unconsolidated.

This has been reflected in the associations representing the sector, which have remained regional or national organisations: the Portland Cement Association in the US, CEMBUREAU in the EU, AUCBM in the Arab League, FICEM in Latin America, among others. With the establishment of the WCA and the GCCA, however, times appear to be changing.

Why the change? There has been a shift in the level of some of the challenges facing the industry, some of which are now international in scope. Sustainability is the core issue here: it is perhaps telling that both WCA and GCCA were founded in a post-Paris Agreement world. Sustainability certainly appears to be at the heart of both organisations’ raisons d’être: the GCCA for example will be taking on the responsibilities of the Cement Sustainability Initiative, which has previously been run under the auspices of the World Business Council for Sustainable Development.

A second challenge is the active promotion of so-called alternatives to cement and concrete in the construction industry. As I wrote last month, timber is now touted as a greener alternative to concrete in the construction of high-rise buildings. With its high greenhouse gas emissions, the cement industry is an easy and high profile target – even if the arguments presented by its opponents do not add up to the complete picture.

The GCCA’s establishment by ten major international cement and concrete producers (rivals under usual circumstances) takes particular aim at such efforts to usurp concrete within the construction industry. One of the GCCA’s executive roles will be a Concrete and Sustainable Construction Director (a position yet to be filled at the time of writing). Despite its dominance in the construction supply chain over many decades, it appears that cement is now in need of an advocate.

Perhaps it is about time. The cement industry has long had great stories to tell: as a critical component of urbanisation and poverty alleviation; the increasing use of waste-derived fuels, reducing the amount sent to landfill; resilient construction in an age of more extreme weather events (to name a few). In the past, however, the industry has all too often hidden its light under a bushel – at least on the international stage. Hopefully, that is about to change.